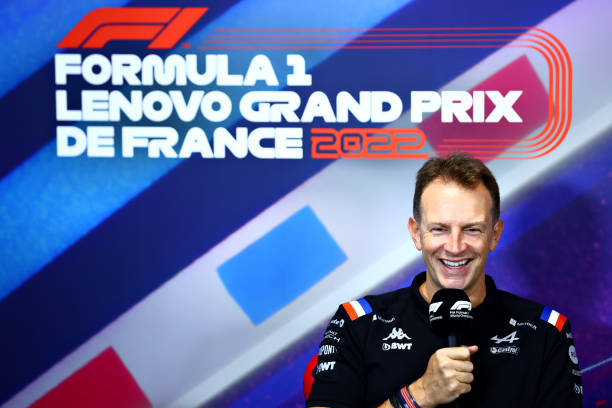 Fernando Alonso’s surprise move to Aston Martin has put Alpine CEO Laurent Rossi in a difficult position. He now has to fill a seat he thought would remain occupied.

The French team’s apparent young and upcoming driver was Oscar Piastri – but he did not have a permanent contract with Alpine, as proven by the FIA’s Contract Recognition Board. Piastri will drive for direct rival McLaren for the 2023 season.

Rossi is looking for a new driver

Now the search was on. A few weeks ago, it was said that up to fourteen drivers were on the list of Rossi and team boss Otmar Szafnauer.

Pierre Gasly and Daniel Ricciardo were mentioned. But younger drivers such as Jack Doohan or Formula E champion Nyck de Vries were also on the list.

According to racingnews365, the list has now been shortened to six drivers.

When Rossi is asked about the future of the driver pairing at Alpine, he explains:

“We’ll take our time, [because] we don’t want to make a mistake,” says Rossi when asked about future driver plans.

“There is no rush and we are in a comfortable situation. In all modesty, we have the hottest seat in the paddock at the moment. We are the fourth team on the grid [in terms of the current Constructors’ Championship], so people are waiting for us before to make a decision.

“Now we are down to six [potential drivers.]

“Some are not yet completely free to make a switch and others may not quite fit in the picture.

“By the end of September we should have a good idea on who we want to sign.”

Moving on from Piastri

After the situation surrounding Oscar Piastri, who went through the junior classes at Alpine as an Academy driver, Rossi would like to forget and think about the future without the Australian.

“We will find a driver who will drive the car, and in the end the car is still the performance differentiator.

“The disappointment stems from having invested so much and the loyalty you show someone, you don’t expect them not to give it back like everyone else.”

The Renault/Alpine driver pairing has not been consistent since 2016.

In eight seasons, eight drivers and seven different driver pairings have competed for the team.

But Rossi explains that these situations strengthen the team, focusing on the car above all else.

“We knew it was going to be some kind of soap opera [when we returned to F1],” he says.

“We knew there was going to be drama and we are ready for it the next time: our skin gets thicker and thicker, but the project continues.”

Rossi is sure that the team is making progress:

“We are making progress and we are moving in the right direction. As I said, the driver is important, but the car is the most important.

“It’s [Piastri] just a little bump in the road. We’ll fix it. In fact, we’ve already closed the book on this subject.

“What we’ve said about this is, in our view, the truth and clear and simple. We’ll leave this behind us and just move on.”

We are curious to see if we can expect a decision for the 2023 driver pairing from the team in the next few weeks.