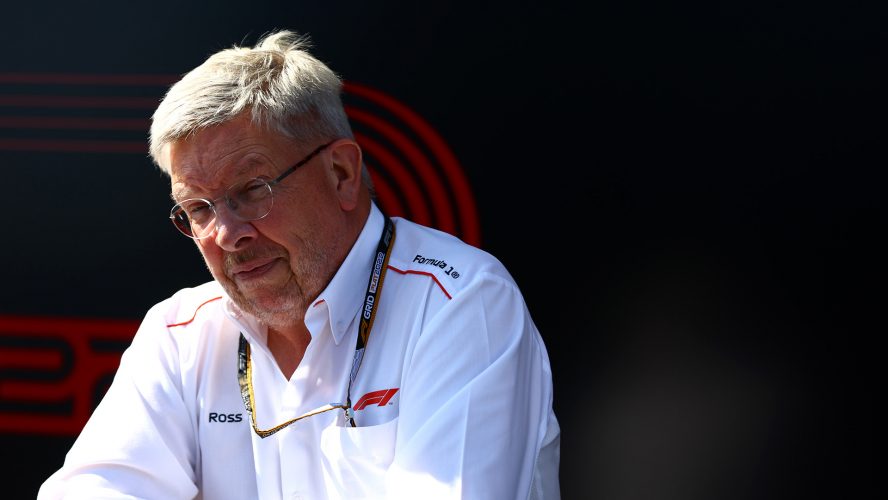 F1’s now former Director of Motorsports Ross Brawn has given a blunt assessment of DRS. While critical, he also suggested a solution to enhance its effects.

Ever since DRS’s debut in 2011, the concept of opening the rear wing to aid overtaking has divided both the paddock and F1’s wider fanbase.  A contentious issue for over a decade, DRS’s integration into the redesigned cars for 2022 was met with anticipation. It was hoped that the dreaded queue or “train” of cars could no longer form. These occur when several cars all follow each other, receiving the benefit of DRS but unable to take advantage. This is because with all cars using the system simultaneously, the effect is negated.

However, as seen this year, the new ground effect cars when combined with the wider opening on the flap introduced have led to easy overtakes. Arguments once again broke out on the strength and power of DRS.

Brawn has now weighed in on the argument. As reported by autosport.com, Brawn admitted that F1 is aware fans do not like the concept. He also highlighted what he believes is the “ideal world” of DRS, using the system to “get on the back of someone to have a decent attack”:  “The one thing we know is fans, and we know this because we don’t like it, they don’t like the ‘go down the straight, pop the DRS, overtake, drive fast, pull a gap’ all of that”.

“I think in an ideal world DRS is used just to get on the back of someone, so you can really have a decent attack.”

Is reducing DRS a solution?

DRS featured as a contentious issue early in the season. At the Australian Grand Prix, four activation zones were originally proposed. Teams pushed the FIA to remove one zone, which Brawn said was “very annoying”.

He reiterated his belief that DRS should be used as an overtaking aid, not a solution, confirming the intention was not to have the zones acting as overtaking spots. Instead, the zones would allow cars to close gaps to competitors and mount an attack: “If you remember, they had four DRS zones and someone managed to persuade them to take one of them off, which was very annoying,” said Brawn. “Those DRS zones were not about overtaking there and then, it was about getting on the back of someone to be able to attack them in the next complex. And that’s the ideal world.”

By Grace Robinson6 days ago
Talk of reducing F1’s reliance on DRS is now gathering pace. Brawn believes the sport should investigate reducing DRS at certain races, removing easy overtaking. His views are similar to reports from motorsport.com that the sport is investigating how to disadvantage the leading cars. Brawn describes the use of DRS at high-speed circuits like Monza as “ritualistic” and “not very impressive”. He stated F1 should reduce the system at tracks “where it’s clearly proving to be too powerful.”

“I think we shouldn’t be afraid to reduce the DRS in places like Monza, because it does seem a bit ‘you get on the back of them, press the button, overtake.’ It’s a bit ritualistic, isn’t it?

“It’s not very impressive. And so we shouldn’t be afraid to reduce the use of DRS where it’s clearly proving to be too powerful.”

Brawn maintains that the intention for F1 is to remove away from relying on DRS to assist with overtaking. This will come from what he calls improved “active aerodynamics”. However, for the foreseeable future, rear rings on F1’s new cars will continue to use the system:  “I think DRS is a useful tool where we want to get cars on the back of another one and them be able to get alongside in a corner and have a wheel-to-wheel battle,” he said.

“It’s just judicious use of DRS. That is what’s needed. It will still be a tool we’ll have to use. Maybe with active aerodynamics that will change.”