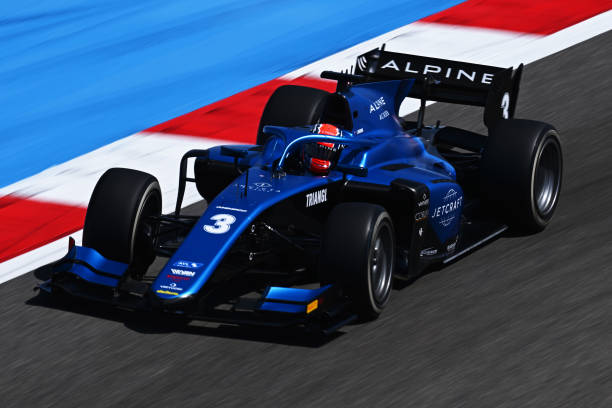 BAHRAIN, BAHRAIN - MARCH 18: Jack Doohan of Australia and Virtuosi Racing (3) drives on track during practice for Round 1:Sakhir of the Formula 2 Championship at Bahrain International Circuit on March 18, 2022 in Bahrain, Bahrain. (Photo by Clive Mason/Getty Images)

The first qualifying session got off to a very dramatic start with a red flag in the first lap after Iwasa spun into the gravel at Turn 2 stalling the car putting the DAMS driver out of the session.

As green flag racing resumed VAR driver Jake Hughes lead a period of dominance only to be challenged by MP Motorsports Felipe Drugovich. Hughes quickly snatched away Drugovich’s provisional pole with a 1:41.121

Moving through the session an incident occurred involving Hi-Tech’s Juri Vips and the F3 champion Dennis Haugher of PREMA. Haugher crossing Vips path as he was entering the pits forcing Vips off course. This remains still under investigation.

Entering the pit window Doohan took full advantage of the clear track showing his skills setting a 1:40.542 +0.5 up on Hughes who remained in second.

PREMA driver Jehan Daruvala also tried to take advantage of the clear track however this only placed him in P5.

As drivers started piling out of the pits, the drama was building Theo Pourchaire going purple in the first sector with PB’s in the second and last sector looked as if he’d be starting on the front row. His place was quickly removed after exceeding track limits at turn 4.

During this period Hi-Tech Driver Juri Vips pulled out a flying lap setting a 1:40.755 after his earlier lap being disturbed by Haugher.

Pourchaire responded to this setback a few laps later once again setting a first purple sector placing himself in P2 with a 1:40.542 pushing Vips down to P3.

Doohan who remained in the pits for the latter of the session will be happy with his performance, especially as one of the rookies entering the F2 field. He also gets a headstart on the championship gaining 2 points for pole position. This leaves him starting 10th for the Sprint Race tomorrow and pole in Sunda

As the top 10 from qualifying will be reversed for the Sprint Race the 10 ten of the grid will line up as follows:

Full results can be found on the F2 website https://www.fiaformula2.com/Results?raceid=1035