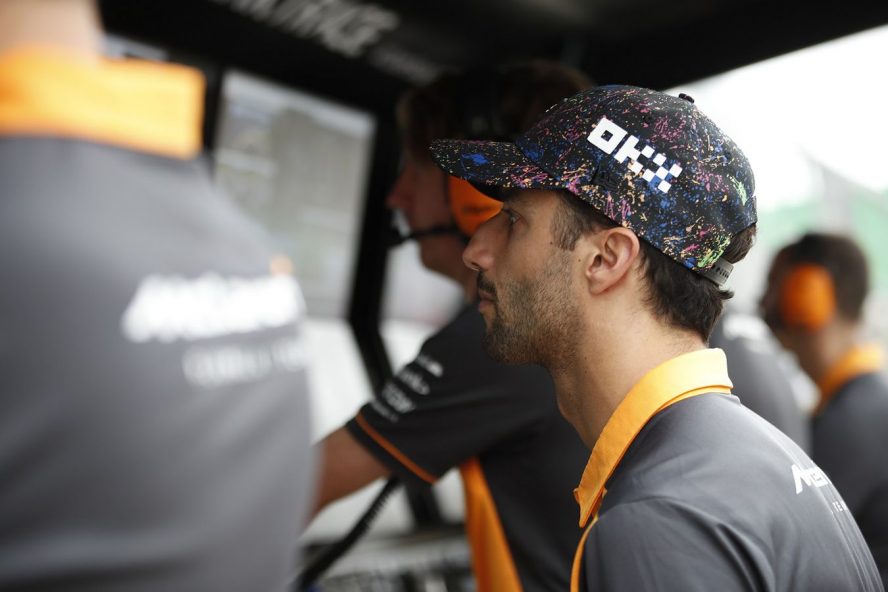 Daniel Ricciardo watches from the pit wall after his first lap crash that would see him penalised (Feature Image Credit: McLaren.com)

Daniel Ricciardo will start his final race for McLaren in Abu Dhabi on the back foot, as the stewards penalised him for race-ending contact with Kevin Magnussen’s Haas.

Lap 1 of the Sao Paulo Grand Prix saw fast and frantic overtaking throughout the field. With key positions in the constructors’ championship yet to be decided, drivers fought hard to move up the order.

Finishing P11 in the Saturday sprint race, Ricciardo looked set for a strong Sunday. However, his race proved to be both short and eventful. Seeing a gap on the inside at the top of the blind crest going into turn 8, Ricciardo made a move to pass the Haas of Kevin Magnussen.

Unfortunately for both drivers, the gap disappeared as quickly as it opened. Ricciardo braked to avoid Magnussen but hit the side of the Haas. This sent the Dane into a spin. Realising the danger, Ricciardo backed off and attempted to steer clear of the stricken Haas. Instead, the Magnussen rolled backwards, hitting Ricciardo and sending the McLaren into the barriers. Both drivers were eliminated on the spot, ruining the remainder of Kevin Magnussen’s stellar weekend that included a shock pole position.

CONTACT! Kevin Magnussen and Daniel Ricciardo are BOTH out of the race! 😮

Thankfully, both drivers are out of the cars 🙏 pic.twitter.com/jvqmolzW1F

Unsurprisingly, Ricciardo and Magnussen were summoned to the stewards over the incident. Ricciardo apologised in his Sky Sports interview, admitting he misjudged his braking when attempting to miss the Haas. After stating the same to the stewards, as reported by formula1.com, a statement released shortly afterwards confirmed Ricciardo had been penalised for the final race in Abu Dhabi:

“Ricciardo made contact with Magnussen at Turn 8 on Lap 1, which caused Magnussen to spin, and subsequently both cars crashed. McLaren explained that in their view, Magnussen was slower at the exit of Turn 8 than the other cars ahead, which made it difficult to judge the closing rate, as the two cars interacted.

“Ricciardo explained that in his view, he had slowed sufficiently that he was not going to collide with Magnussen and that he slightly misjudged it”.

The stewards acknowledged Ricciardo “was not reckless”. However, its statement firmly lay the blame for the incident with the Australian. He will now start his final race for McLaren with a three-place grid penalty to contend with. A far from ideal situation considering teammate Lando Norris retired from Sunday’s race:

“The stewards determined that Magnussen drove in a normal manner for that corner, and that he did not make any erratic moves. Thus the stewards determine that Ricciardo was wholly to blame for the incident and issue a drop of three grid places for the next event.”

The Sao Paulo GP saw McLaren fall 19 points behind Alpine with just one race left. That race will now see one of its drivers penalised and at a disadvantage before the race has even begun.