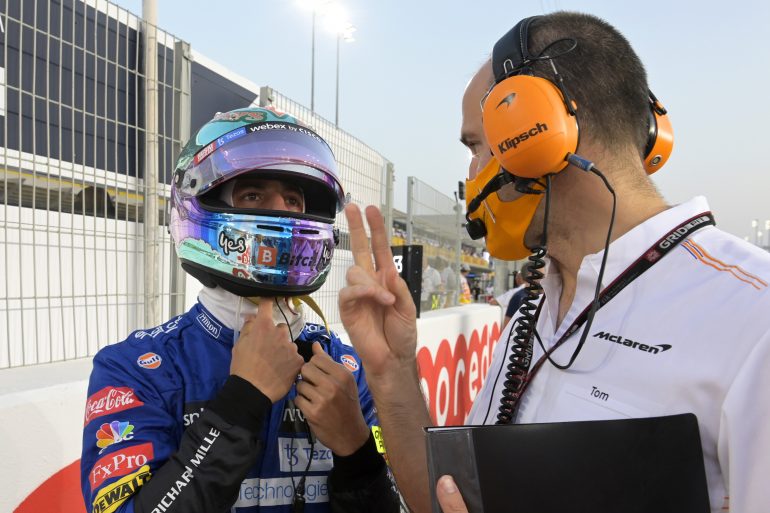 Daniel Ricciardo, McLaren, on the grid

Ricciardo on gap to Norris : “Even with me and Verstappen, I was furious if he was two tenths faster”

McLaren driver Daniel Ricciardo once again spoke out on his difficulties in adapting to the MCL35M and the team’s efforts in trying to get him to maximize his performance.

The Honey Badger’s 2021 season is difficult to describe. If in races like Monza he proved to have not mysteriously lost his talent, during most weekends he seems to struggle to be on the same pace as Lando Norris.

Ricciardo admitted to GP Racing his development within the car wasn’t as expected: “The natural picture in my head was that every lap I do in this car, I’d just get better. In Bahrain, I qualified sixth and I knew I still wasn’t close to 100 percent comfortable. So in my head, I was like, ‘Well, each time I drive now I’ll just push the car more and more.”

“And then I, let’s say, hit an early plateau where the limit was a different limit to what I was used to. And to arrive at that limit, I needed to drive the car quite differently. The car has some really strong points but also some weak points, and I was just trying to navigate my way to the strong points. It didn’t always come natural for me.”

According to the Aussie, McLaren tried to help him by analyzing the tracks and car performance piece by piece: “The key was trying to break it down and understand it corner by corner because, as a whole, there were times when I was seven or eight tenths away (from Norris) and I was like, ‘I can’t do that. I don’t know where that time is.”

Furthermore, Ricciardo admitted the situation was completely new to him, even compared to his internal rivalry at Red Bull with Max Verstappen: “Even with me and Max (Verstappen), a really strong and competitive rivalry, I remember Nthan me. We all know the calibre of driver Max is. So – and I’m not taking anything away from Lando – a gap that big is like foreign territory really. I’ve never found myself in that position.”

Effectively, Ricciardo is currently only eighth in the Drivers’ Standings with 105 points, finishing the last tripleheader (Mexico, Brazil, Qatar) pointless. Although McLaren seems to be encountering problems in adapting the car at the end of the season and only conquered 4 points in the last races, the difference with Norris remains clear, with the Brit fighting for 5th in the Drivers’ Championship with 153 points.

“It wasn’t like I made a mistake here or there, it was that I didn’t know where that chunk of time was. Tom was good at bringing it back and saying, ‘Look, let’s analyse, let’s go through this corner – why can’t you do that, what’s stopping you? Let’s figure it out, let’s go from A to B to C, as opposed to just going straight from A to F.”

For an experienced and winning driver like Daniel Ricciardo, it can be difficult to admit his difficulties, especially when they seem without reason. Hence, the Australian needed to move pride away: “Race car drivers or athletes, we are a certain amount of stubborn. But you can’t take that to your grave, if you know what I mean. At some point you have to be open-minded and say, ‘All right, this is what it is. I have to now adapt and maybe I’m not comfortable with it at first, but take encouragement that the more I learn and get comfortable with it the better I’ll be”.”