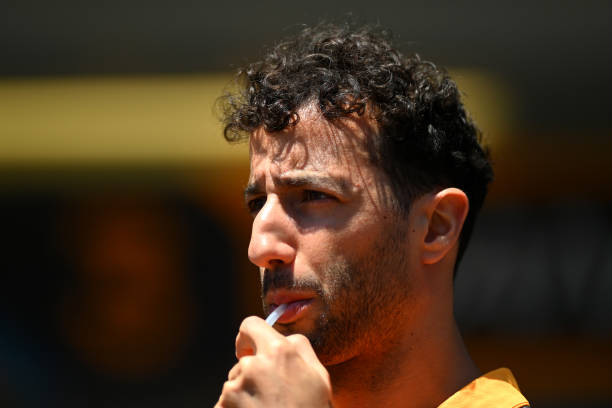 BAKU, AZERBAIJAN - JUNE 12: Daniel Ricciardo of Australia and McLaren talks to the media ahead of the F1 Grand Prix of Azerbaijan at Baku City Circuit on June 12, 2022 in Baku, Azerbaijan. (Photo by Dan Mullan/Getty Images)

Ricciardo: “I still believe I have it”

Daniel Ricciardo believes that he will quickly be back on top form.

McLaren driver Daniel Ricciardo believes he can get back on form.

It’s no secret that Daniel Ricciardo has had a rocky start to the season only outperforming his teammate Lando Norris three times this season. The Australian driver sits 35 points behind his teammate after only claiming two top-ten finishes.

Despite his start to the season, Ricciardo is still confident in his abilities saying,

“I still know what I can do. I still believe I have it and it’s not a place of low confidence or low self-esteem where I’m like I don’t think it’s possible.”

After moving to McLaren in 2021, Ricciardo struggled to get to grips with the car and addressed that elements of last season’s car have been passed through. The McLaren driver commented saying “even with the changes this year, there is certainly still some things that carry over from last year’s car, and some things the car did last year, it still does this year.” He goes on to address that he’s “still trying to get on top of that. But it’s a place where I didn’t really find these issues in the past, that’s why it’s something a little bit new or unfamiliar for me.”

The McLaren driver acknowledged that “it’s taken longer than I would’ve liked to get the results and consistency” but feels “it’s not far off.

Looking to the rest of the season Ricciardo feels he needs to be more “in tune” with his car.

“I think at this sport, everything operates at such a high level and if something is a little bit out of tune, then it can have a little bit of a carry-on effect. It’s really for me to get back into that place when I’m fully in tune with the car, and then it will come”

Ricciardo reflected, “I have felt it before. It could come at any circuit, and I think from then, then it will probably start to build again, some nice rhythm.”

Formula One moves to Canada for the eighth round of the season a track Ricciardo is very familiar with after taking his maiden F1 win there in 2014.

Speaking to F1 he reflected on his win in Monza last year saying “I don’t want to keep talking about Monza, but there were times last year where I was able to show that I can make it work with this car.”

Adding that “I do think we’re closer this year than last year funnily enough.”

The McLaren driver then went on to address his ambitions for the rest of the season by saying he wanted “to cross the line now with less people in front of me and more behind me and everything is sweet.”

Will Ricciardo claw back into the point-scoring positions in Montreal?