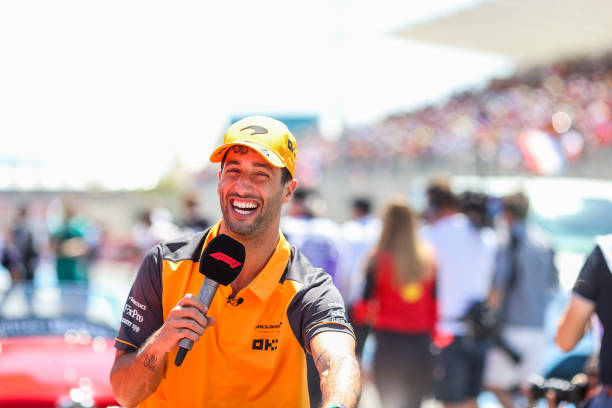 Ricciardo: “Give me a winning car and I’ll win”

Daniel Ricciardo spoke about his future in Formula 1 and his struggles this season to Ted Kravitz.

Speculation surrounding Daniel Ricciardo’s future has been the talk of the paddock in recent weeks. The uncertainty of whether he would remain with McLaren only strengthened when Colton Herta completed a Formula 1 test and the Woking team signed Alex Palou.

However, after Palou was signed, Ricciardo confirmed would be staying with the team for 2023. In the statement on social media, he said he is “committed to McLaren until the end of next year and am not walking away from the sport.”

During Sky Sports F1’s broadcast of the French Grand Prix last weekend, Daniel Ricciardo sat down with Ted Kravitz. The two discussed Ricciardo’s statement, his struggles and his future in Formula 1.

The main issue for Ricciardo

Kravitz asked Ricciardo about the struggles that have persisted from last season into this year. Lando Norris briefly touched on this earlier this month, saying the MCL36 is a difficult car to drive. However, Ricciardo has gone into more detail, specifying for him, what the issue is.

Riccardo said that as a Formula 1 driver, “the car is really connected to you, like you’re strapped in and it’s part of you. And you need it to be a part of you, like every kind of movement you do, the car needs to move with you.”

For him, “the feeling [he is] trying to chase is not always like that.” Ricciardo elaborated saying “it’s not always connected so it won’t respond maybe in sync with [him].” As a result of this, “there’s a little bit of perhaps uncertainty with what’s going to happen next.”

When explaining it to Kravitz, he likened it to trying to dance with someone who doesn’t dance. He said, “if you aren’t in sync, then you aren’t dancing. You can’t dance.”

Can they turn it around?

Despite these struggles with feeling connected to the car, the Aussie is still confident in his and the team’s progress He said he feels as though they are “getting closer” to being able to turn it around. He added, “I feel like we come out of every weekend, whether it’s good or bad weekends, and we’re like okay this now makes more sense.”

Ricciardo said that his passion for F1 is “absolutely” still there. He has not lost that passion of “enthusiasm for the sport.” He reiterated this when speaking about his Instagram story.

“I know what I’ve got. I know my future, I know my contract. People obviously create questions and their own answers, so it was just setting it straight.

“Also people that support me, it was letting them know that still means a lot to me. Like those bad days are sometimes the best days because it ignites that fire. And it’s like okay, I get that feeling in my gut and I’m like okay this still means a lot.”

“Give me a winning car and I’ll win.”

He knows that there are challenges that lie ahead with himself and with the team. But he is determined to “figure this out” and “take on this challenge with [McLaren].” Ricciardo knows that if they can figure out these issues and solve the problems, producing a “winning car”, then he can give McLaren wins.

He concluded with admitting “that’s the confidence [he has in himself] and that’s ultimately why [he] still wake[s] up wanting to do” Formula 1.”

The French Grand Prix saw both cars finish in the points. Lando Norris finished seventh, having moved down from where he qualified. Ricciardo maintained his P9 position.

Next up is the Hungarian Grand Prix in Budapest. Last year, Ricciardo finished the race just outside the points in 11th, which is where he qualified.

With his drive to get good results, and the slight improvements made last weekend, it is possible we could see McLaren having a good race. The team are now fifth in the Constructors’ Championship, behind Alpine, so it’ll be a battle to see whether McLaren can close the four-point gap.