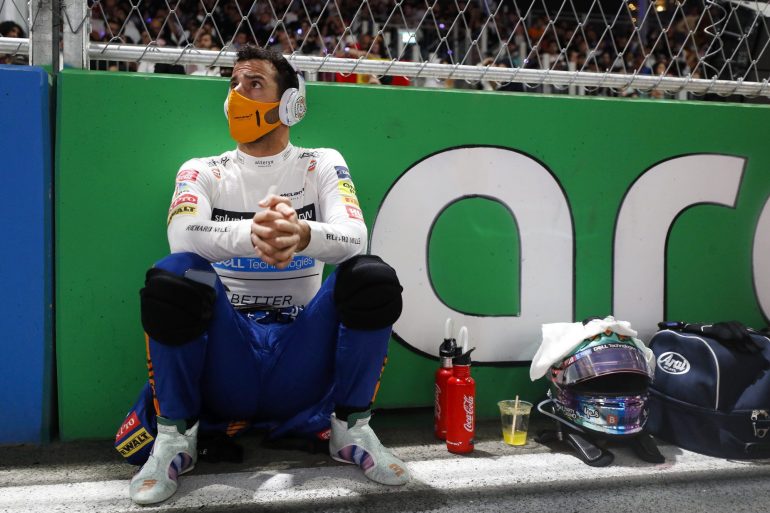 Daniel Ricciardo had to suffer, as many, the consequences of the Covid-19 pandemic. The Australian wasn’t able to travel back home or see his family for nearly two years and has now admitted the situation has been particularly “frustrating” while dealing with the difficult 2021 season.

Australia faced Coronavirus with strict laws and closed borders for most of the past two years. Furthermore, the tight schedule of an F1 driver didn’t allow Daniel Ricciardo to find the right time to visit his family until the start of January 2022. While many use the Honey Badger situation to further criticize the decision to allow tennis player Novak Djokovic to access the country while unvaccinated, Ricciardo went on to explain his difficulties to Autosport.

The 32-year-old admitted: “Homesick sounds dramatic, but I definitely missed family and stuff. We’ve normally had the quite fortunate [option] to, if I wanted mum and dad here, I’d say, ‘guys, I’m gonna buy your plane ticket, jump on a plane and come.”. So the ability not to be able to do that as well kind of made it also quite frustrating, because it’s out of our control.”

Ricciardo went on to explain how the situation was made even worse by the difficult transition to McLaren: “I wouldn’t say it affects me in the act of driving. But particularly when maybe it doesn’t go well, then it definitely has an effect because all you want is some of that support, and family love. And also when it doesn’t go well, you can also feel very lonely.”

Although the Aussie’s struggles weren’t solely down to what he was facing personally, the McLaren driver believes his family would have made it easier: ” There’s elements which I think they would have helped, if they were here, it would have helped me snap out of a bad mood or low moment a bit quicker. ”

Overall, Ricciardo believes mental health surely has an impact on the season: ” [Not being able to see my family] made the situation a bit more tricky. With anything, to perform well, you also need to be in a good headspace. Therefore your outside life needs to be going well, your relationships, it kind of all reflects on to your training, your energy, your mood.”

The impossibility to return home has even been brought before the UN Human Rights Committee in Geneva as the problems suffered by Ricciardo affected more than 40.000 Australians.

According to the Aussie, the biggest difficulty was the lack of distractions: “I’m used to not having [family] around, but again, not having that for so long, and missing things and even my friends back home, not having them to even switch off with, get away for a weekend, or let’s go wherever, let’s just get away and not think about F1 – I also didn’t have that escape.”

Regarding the effects on his disappointing season in F1, Ricciardo claimed: “That made the grind of the first half of the year just more taxing. So yeah, I think it was harder for me to be like pumping with energy and positiveness and all that sort of stuff. I still found a way to, but I had to work a lot harder for it. And that I think was taxing in itself.”

Formula 1 is supposed to return to Australia in April after the cancellation of both the 2020 and 2021 editions of the Grand Prix. The hope is for the Honey Badger to be finally able to enjoy the home support and family’s presence in a season that might be crucial for his permanence at the pinnacle of motorsport.