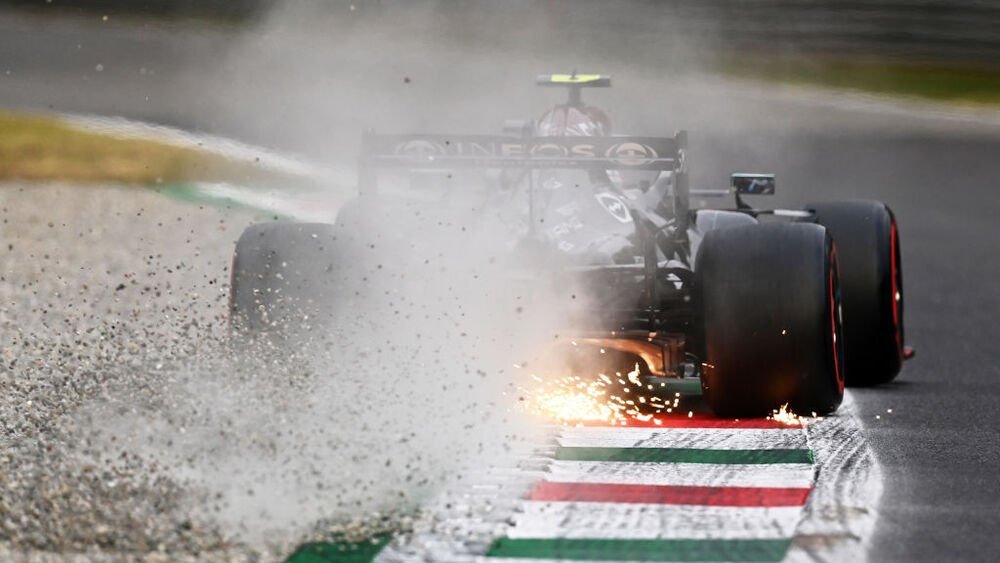 Redemption for Bottas at Monza qualifying

Valtteri Bottas finished an impressive P1 at Monza ahead of Saturday’s sprint qualifying.

Bottas, who is leaving Mercedes at the end of the season to join Alfa Romeo, put in a superb final lap in Q3 to beat his teammate Lewis Hamilton by 0.096 seconds.

But Bottas, who will start Saturday’s sprint qualifying from pole, will start from the back of the grid on Sunday due to an engine penalty.

It was the usual shenanigans at Monza during qualifying, with drivers squabbling over track position in order to receive a vital slipstream from others for their flying laps.

Ahead of the final runs in Q3, it was Red Bull who pulled the trigger first, sending out Sergio Perez with Verstappen closely following.

Further back, Hamilton nestled in behind Bottas towards the rear of the queue, but it was the Finn who put in an excellent flying lap to take a surprise pole from his teammate.

Verstappen will likely be content with third after a day which showed Mercedes to have the superior package on the Italian circuit.

The Dutchman was second and only 0.05 seconds off Hamilton after the first runs in Q3, but couldn’t improve with his final attempt.

Both Mercedes cars went quicker, with Bottas finding an abundance of time to top the timing sheets.

McLaren enjoyed an excellent qualifying session and both of their drivers were narrowly behind Verstappen in fourth and fifth, with Lando Norris heading Daniel Ricciardo.

Pierre Gasly was sixth for Alpha Tauri, ahead of the Ferraris of Carlos Sainz and Charles Leclerc at their home grand prix.

It’s been a tricky few months for Bottas which came to a head earlier this week when it was announced Mercedes would not be renewing his contract and he would instead race for Alfa Romeo next season – with George Russell taking his place at Mercedes.

But it was a strong response from Bottas who pulled a sensational lap out of the bag at the end of qualifying to beat Hamilton.

It looked like the Briton was set for another Friday night qualifying pole, adding to the one he picked up at Silverstone until Bottas shocked at the very end of the session.

But the Finn, who will be crucial during Saturday’s sprint qualifying, will start Sunday’s race from the back due to engine penalties.

Most importantly for Mercedes, they have both of their drivers ahead of Verstappen and appear to have the superior car this weekend.

Last weekend, Max Verstappen was in a class of his own as he took a dominant victory at Zandvoort.

But on Friday, the Red Bull just didn’t seem to show the same pace at a very different Monza track.

It always looked likely that the Dutch driver would have to settle for third behind the Mercedes cars, but did manage to get ahead of Bottas after the first runs in Q3.

But Verstappen couldn’t improve when it mattered, being comprehensively beaten by the Silver Arrows and was fortunate not to end up behind the McLarens, as Norris was only 0.02 seconds behind.

Verstappen could be looking over his shoulder rather than forwards in both races to come this weekend.

It was another difficult day for Perez in the other Red Bull.

The Mexican was sacrificed in Q3 to provide a slipstream for Verstappen and could only manage ninth.

The line up for Saturday's #F1Sprint 👀 #ItalianGP 🇮🇹 #F1 pic.twitter.com/dKIjtG0oYo