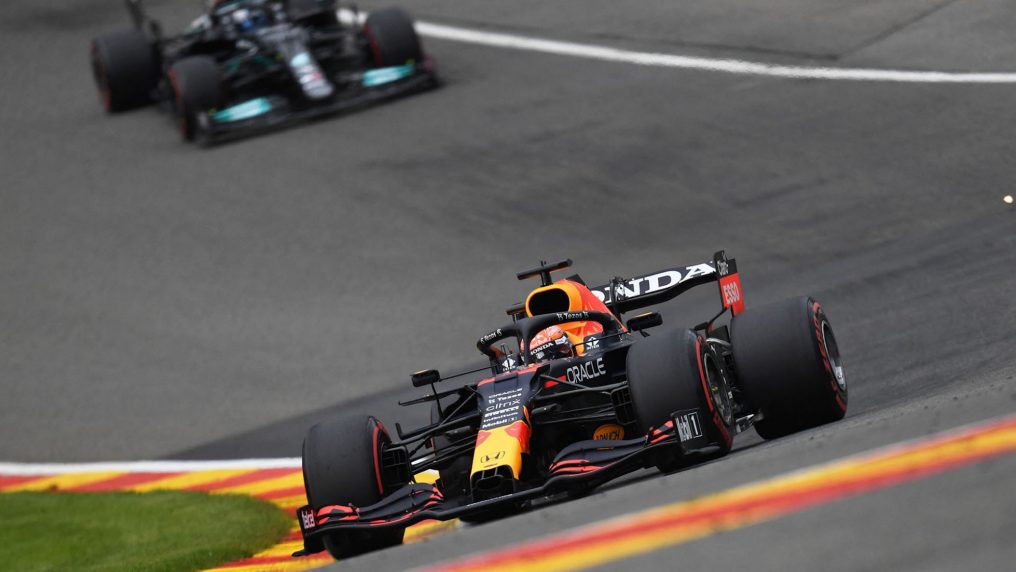 Max Verstappen was fastest in a damp final practice session at Spa.

It was an unexceptional session as the drivers carefully rounded the track on intermediates on a drying circuit – although there were intermittent showers throughout.

Hamilton, who admitted to struggling with the setup of his Mercedes on Friday, had a few perilous moments, including going off at the Les Combes chicane, the same place where Ferrari Charles Leclerc crashed during second practice.

McLaren’s Lando Norris was fourth ahead of the impressive Esteban Ocon in the Alpine.

Lance Stroll and Sebastian Vettel were once again sixth and eighth, continuing their good form on Friday in the Aston Martins – this time they were split by Pierre Gasly’s Alpha Tauri, who had a near-miss with the barriers after a spin.

George Russell enjoyed a positive session in the Williams and was 2.568 seconds off the pace in ninth.

The other Alpine of Fernando Alonso rounded out the top 10, while Hamilton’s teammate Valtteri Bottas was 11th, 2.884 seconds behind Verstappen.

Advantage Red Bull ahead of qualifying

Verstappen was much quicker than the rest of the field in final practice, which provided similar conditions expected for Saturday afternoon’s qualifying session.

The Dutchman was almost a second clear of teammate Perez and had an even larger gap back to Hamilton in the Mercedes.

The slippery conditions did seem to suit the Red Bull more, although more rain is forecasted between final practice and qualifying, which could mean full wet tyres might need to be used.

Hamilton struggled with the greasy surface and had moments at Les Combes and Turn Nine.

Bottas couldn’t match the pace he showed yesterday in dry conditions and ended the session a lowly 11th.

Ferrari not up to pace

It was another disappointing session for Ferrari.

The Scuderia had struggled throughout Friday at Spa, and things were made worse by Leclerc’s crash at Les Combes in second practice.

Both were well of the pace again on Saturday morning. Leclerc finished the session 16th, two places behind teammate Carlos Sainz.

A further concern for Ferrari will be the pace of Norris in the McLaren, who ended final practice in fourth and was more than two seconds quicker than Sainz.