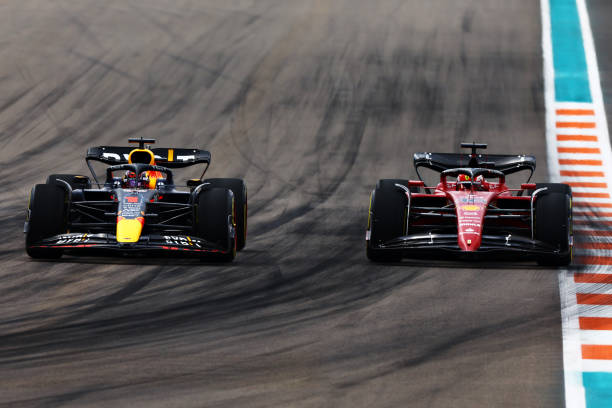 MIAMI, FLORIDA - MAY 08: Max Verstappen of the Netherlands driving the (1) Oracle Red Bull Racing RB18 overtakes Charles Leclerc of Monaco driving (16) the Ferrari F1-75 for the lead during the F1 Grand Prix of Miami at the Miami International Autodrome on May 08, 2022 in Miami, Florida. (Photo by Mark Thompson/Getty Images)

Helmut Marko has downplayed Red Bull’s spending on recent upgrades, responding to recent claims from Ferrari that they have burned through their 2022 F1 Budget.

Red Bull’s recent wins in Imola and Miami have seen Ferrari’s gap at the top of the championship rapidly decrease. The sudden shift in form has led Scuderia Ferrari team principal Mattio Binotto to believe that Red Bull have only been able to catch up due to excessive spending on their early upgrades to the RB-18.

Binotto claimed that Red Bull won’t be able to keep upgrading their 2022 vehicle thanks to the newly introduced Formula One budget, believing that the Austrian team have likely spent more of their budget compared to the rest of the pack.

“I don’t think we are in a significantly different position to Ferrari in this regard,” said the Austrian.

“Especially since I wonder what effect it has on them that Carlos Sainz has already crashed the car several times, that can’t be cheap.

“We plan our updates in such a way that we always lose weight with each update.

“Unfortunately we still haven’t reached the minimum weight and we won’t quite reach it with the next update either.

However, Marko did acknowledge that the increase in freight costs has led the team, like everyone else, to be wary of their logistics budget.

“It’s true that the increased logistics costs are a problem,” he said.

“But that doesn’t just affect us, it also affects Ferrari and all the other teams.”

Despite Marko downplaying the costs, Red Bull’s team principal Christian Horner admits that upgrades will need to be brought in “strategically”.

“I think with the budget cap this year, it is very hard to just bring continuous developments,” said Horner.

“So you have just got to strategically pick where you want to introduce your components because especially with inflation the way it is, that is brutal.”

Red Bull are going to want to stay on their toes ahead of the Spanish Grand Prix as Ferrari are set to bring their first set of upgrades in Catalunya next week.