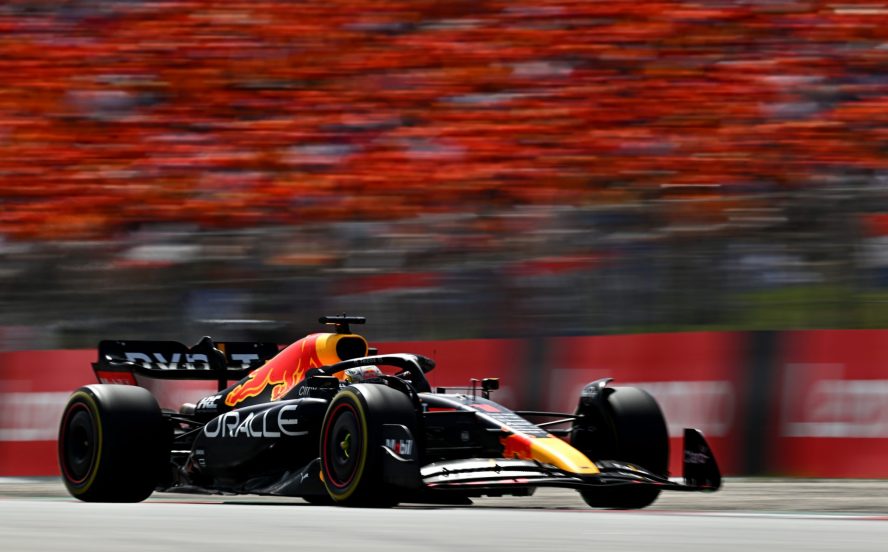 Red Bull’s Max Verstappen flapped his way to victory in an eventful Spanish Grand Prix for Red Bull, despite DRS activation problems on his RB18.  Teammate Sergio Perez came home second after a strong performance from the Milton Keynes team.

Catalunya baked under the May sun. before the race. Drivers and mechanics struggled to stay cool in the searing heat as the cars took to the grid.

There was more drama before the start for Red Bull, as yet more repairs were needed on reigning world champion Max Verstappen’s car. The team replaced the rear wing after a fault caused the Dutchman to abandon his final run in qualifying. The issue would rear its head throughout the race.

At lights out Leclerc swiped his Ferrari to the right to cover off Verstappen, with Russell improving to third. Hamilton and Magnussen made contact after the Dane tried to go round the outside of the seven-time champion. Magnussen continued at the back, while Hamilton had to pit with a puncture. The medium tyres the Briton started on were a brave choice. The Mercedes was damaged, as Hamilton started a long recovery drive.

Sainz’s Ferrari went into anti-stall at the start, losing the home hero speed off the start. Perez’s Red Bull saw an opportunity to pass, but the two made contact at the first corner.  Sainz dropped to P5 falling behind the top three.

A fast and frenetic opening few laps saw plenty of action. Leclerc, Verstappen and Perez broke off from the rest of the field, and the gap between Leclerc and Verstappen stabilised at 1.2 seconds.

A series of passes lower down the field saw Ocon and Alonso move up the order. Alonso’s pass on Vettel was typically bold for the Spaniard, taking to the grass as a result of Vettel’s strong defence.

The top three were providing plenty of action, with Sainz spinning at turn 4, consequently dropping further down the order. Perez meanwhile, crawled all over Russell for third. The Briton soaked up the Red Bull’s pressure, remaining in front of the Mexican. Lap 9 saw Verstappen running wide onto the gravel at turn four, the team stating a tailwind was the cause. Dropping behind Perez,  Russell continued to resist the Red Bull advances, now running second. Perez let Verstappen through to attack the Mercedes.

The DRS flap issue seen on the grid reared its head, leaving the Dutchman unable to pass the Briton. The flap would flick open occasionally, but not to the extent needed to line up a pass.

Verstappen may have DRS issues! It just flicked open and closed again ❌😶 pic.twitter.com/9xXEK5U0DO

The next lap saw Verstappen’s best chance yet but suffers from understeer into turn one.  McLaren’s Daniel Ricciardo is passed by Mick Schumacher in further disappointment for the Australian.

Verstappen makes his move on lap 24, passing Russell at turn one,  Russell keeps the outside line, repassing the Dutchman. The Stewards take note of the move but take no further action.

In a shock retirement,  Charles Leclerc’s Ferrari suddenly slows and retires on lap 27, robbing him of a certain win! Russell now moves to P1. Verstappen pits for soft tyres, to try and undercut the Mercedes. He rejoins on softs.

Perez passes Russell for the lead into turn one after closing on the Mercedes. Zhou retires for Alfa Romeo, another Ferrari power unit failure a lap after Leclerc’s. Verstappen overtakes Bottas for P4 around the outside approaching the final chicane. Russell peels into the pits on lap 36 after Verstappen catches him. Comes out on mediums, rejoining in P3. Perez takes P2 off Russell at his next pitstop.

Charles Leclerc is OUT OF THE RACE 🤯

That's a big moment in the world championship, too! 🧐 pic.twitter.com/yMaf3CI559

Once Verstappen pitted for mediums on lap 44, he handed the lead to Perez.  The Dutchman, significantly, rejoins in P2 well ahead of Russell who remains in P3. Red Bull on the radio tells Perez to not make life difficult for Verstappen as the two drivers are on different strategies. Inevitably, the Dutchaman is let through by his teammate after this call.

George Russell pits for the final time, losing third to Bottas, but quickly passes the Alfa Romeo to reclaim his place on the podium after chasing the Alfa Romeo.

Hamilton’s trying afternoon continues, being shown the black and white flag for track limits infringements.  After his pitstop, Hamilton begins to fly on his soft tyres, passing Ocon for P6, and before chasing down P5.  Mercedes targets Bottas, running well in P4.

laps 58 to 60 saw an intense battle for P4. Bottas,  Sainz and Hamilton, are all fighting over the same piece of tarmac after Sainz and Hamilton chase diown the Alfa Romeo.  Sainz passes Bottas on the straight, Hamilton following him through. Once clear, Hamilton then pressures Sainz and passes the Spaniard going into turn one for P4 despite being last at turn 1. However, all was not well with his car or teammate Russell. Both cars were lifting and coasting due to fear of both cars retiring. Sainz passing Hamilton for P4 on the penultimate lap, Russell’s P3 was safe.

Out in front, Verstappen wins from Perez, Russell keeping third despite his car problems. Sainz recovered to P4, Hamilton P5, Valtteri Bottas P6.  Ocon, Norris, Alonso and Tsunoda round off the top ten.

Red Bull will be particularly happy with this performance. Reliability has now afflicted both Red Bull and Ferrari, with both teams showing retirements are a risk. Charles Leclerc no doubt will want to put this challenging weekend behind him.