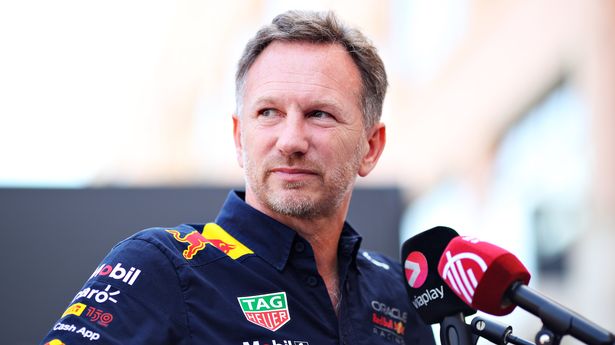 Red Bull Team principal Christian Horner is confident that the race pace from the RB18 is fast enough to overcome Scuderia Ferrari driver Charles Leclerc’s quick qualifying lap which sees him in pole position for tomorrow in Azerbaijan.

Whilst Leclerc’s pole position may have caused a worry for Horner’s men last week in Monaco, the Brit believes Red Bull’s straight line speed and the gigantic straight in Baku will become a big factor the race outcome tomorrow. “I think we’ve shown that on a Sunday, we’ve had a good and competitive race car,” said Horner to Sky Sports F1 after Qualifying. So at a track you can overtake at we’re hoping to give him a hard time tomorrow.”

The 2.22km main straight will be a worrying sight for Charles Leclerc as he will have Monaco Grand Prix winner Sergio Perez and reigning World Champion Max Verstappen breathing down the back of his neck.

“It such a long straight here so the DRS affect is pretty powerful,” said Horner.“But of course you’re gonna be close enough to use that.” Whilst Horner is happy with two cars splitting their title rivals Ferrari, he believes only “tight” margins are what separated them from pole.

“I thought before the quali it was going to be very tight, I felt that over a single lap, Ferrari had the edge,” he said. “I think they just had the upperhand in every single lap so we focus more on tomorrow than today. We’re second and third we’ve seen some great racing this year between ourselves and Ferrari I think this years cars have demonstrated that you can follow a little closer and overtake so we’ll be hoping to make use of that tomorrow.”

Vettel: “Have the balls to criticise me in person”

By Grace Robinson2 hours ago

Despite losing out on those fine margins, Horner is still very impressed with second and third spot. “It was a great performance by both the guys there,” said the Red Bull boss. “Checo carrying that confidence from Monaco to a track he’s always excelled at here without the benefit of any tow, a good lap for him.”

“He didn’t get the benefit of a tow but he did have a perfect out lap so you can see actually his performance is pretty mighty. I think with a tow it would’ve been close but I still don’t think required to pace to nail Charles today.”

Red Bull will be keen to catch out Ferrari on the straights of Baku tomorrow in order to extend their advantages in the Drivers and Constructors championships.