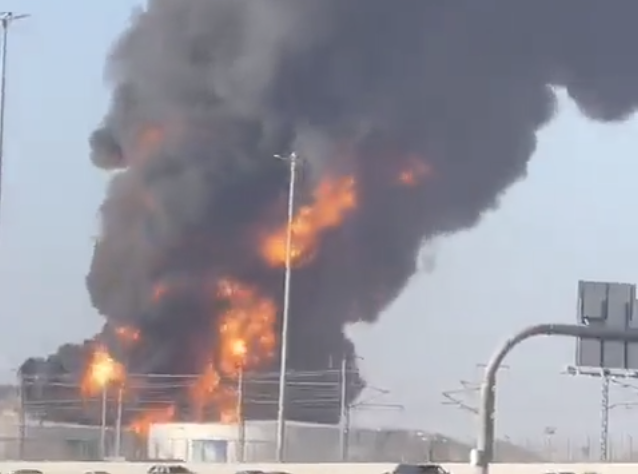 A loud explosion went off as a fire broke out at an Aramco petrol facility in Jeddah.

#Breaking | A few minutes ago, the Houthis attacked Jeddah and hit Aramco’s petroleum facilities in Jeddah, west Saudi Arabia, a loud explosion was heard and a fire broke out. pic.twitter.com/IW0nivmxVt

It’s been reported that Yemen’s Houthis rebels were allegedly linked to a recent series of launched attacks. The cause of today’s  blaze was not immediately known though. The North Jiddah Bulk Plant is quite close to the city’s international airport too.

Massive amounts of black smoke can be seen close to the Jeddah Corniche Circuit. This raises concern after FP1 took place today.

Following that, FP2 was delayed by 15 minutes when team bosses and drivers were called to a meeting.

Saudi Motorsport Company organisers shared, “We are aware of the attack on the Aramco distribution station in Jeddah earlier this afternoon and remain in contact with the Saudi security authorities, as well as F1 and the FIA to ensure all necessary security and safety measures continue to be implemented.”

Then FIA President, Mohammed Ben Sulayem said, “They are targeting the infrastructure, not the civilians, and, of course, not the track. We’ve checked the facts and we’ve got assurances from the highest level that this is a secure place. Let’s go on racing.”