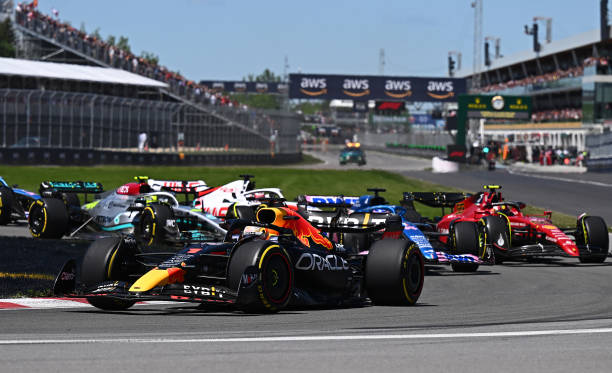 Who emerged victorious in round nine?

The Canadian Grand Prix was a race decided by strategy as Max Verstappen further extended his championship lead.

As we have come to expect from Verstappen, he made a strong getaway as the lights went out. Despite the jumbled grid, it was a clear first lap.

Many hoped that Schumacher would achieve a solid points finish today, but his race did not get off to an ideal start. His Haas was rapidly passed by both Esteban Ocon and George Russell, the latter improving to 7th position.

Meanwhile, Schumacher’s teammate seemed to be doing well until a close battle with Lewis Hamilton saw him damage his front wing. As the black and orange flag was flown for Magnussen, he was forced into the pits on lap five.

Looking back to the front of the pack, Carlos Sainz remained close behind his childhood idol as Verstappen build an easy lead over the two.

Stage one of the battle of the Spaniards saw Sainz emerge victorious as he overtook Fernando Alonso, with Hamilton attempting to join in behind them. However, Sainz failed to create an effective gap to the Alpine driver as he suffered from graining on his front left tyre.

The first few laps suggested that the race would not live up to the high expectations produced by yesterday’s qualifying session. For Sergio Perez, the clean racing was proving advantageous as he continued to improve after starting down in 13th.

That all changed when he began to slow on track, eventually pulling off to the side with a power unit issue. The virtual safety car signal came out, allowing Hamilton and Verstappen to pit for fresh tyres. Consequently, Carlos Sainz inherited the lead after Ferrari made the bold decision to not pit either of their drivers.

Focus then switched to the four-way battle for 10th place between Albon, Bottas, Leclerc and Norris. The group remained in the DRS range for several laps before the Williams slipped behind both Bottas and Leclerc.

Once again, the virtual safety car made an appearance. It was more heartbreak for Mick Schumacher, who arguably had his best opportunity to score his first points today. Through no fault of his own, he became the second driver to retire due to a technical issue.

His tragedy became a beautiful chance for a multitude of his rivals, with many heading into the pits. However, this revealed itself as a poor decision for McLaren.

The papaya team attempted to double stack their cars, but a slow stop for Ricciardo ruined Norris’ stop. Mechanics initially put the wrong tyres onto the Brit’s car, deciding his fate for the remainder of the race.

There were several simple overtakes once the virtual safety car came in, with the order also changing after the pit stops.

Whilst Leclerc extended his stint, Sainz changed his tyres and emerged just ahead of Hamilton. Once he had warmed his hard tyres up, he improved to second place, still closely followed by the Mercedes.

It wasn’t until lap 29 that Alonso, who had dropped back to P4, finally changed to new hard tyres.

These tyres became the hot topic, with many drivers complaining that graining was affecting their races. This may have been one factor that prevented Leclerc from passing Esteban Ocon, who found himself in P5 around 20 seconds behind the frontrunners.

Once Ferrari eventually decided to call him into the pits, a painfully slow stop saw him drop back outside of the points.

Another tyre change came for Verstappen, and there were flashbacks to 2020 as the Red Bull emerged just behind Hamilton. The championship leader quickly passed him as Hamilton soon headed into the pits.

Closing stages of the race

With 20 laps to go, Yuki Tsunoda became the third driver to retire after failing to make the corner at the pit exit.

For the first time in the race, the full safety car was brought out. As Bernd Maylander bunched up the pack, Sainz was able to pit for fresh tyres and remain in second place.

There was the potential for an entertaining final stint. Sainz and Verstappen were evenly matched in terms of tyres. Both Mercedes appeared to be the fastest cars on track. Leclerc had something to prove down in P7. Anything could have happened.

But nothing did. At the restart, the order remained exactly the same as it had been, with Sainz struggling to stay within a second of the leader.

With 14 laps still to go, just three seconds covered the top four. DRS was once again enabled as Sainz found himself less than a second behind Verstappen.

This remained the case for the next few laps as his fellow Ferrari driver passed both Alpines to move up to fifth.

The Dutchman was unable to shake Sainz, but the Ferrari could never get quite close enough to take a maiden win. With the gap consistently staying under a second, the final laps were the tensest they have been all season. But despite driving to the limit, Sainz could only settle for P2 as Verstappen took his sixth win in 2022.