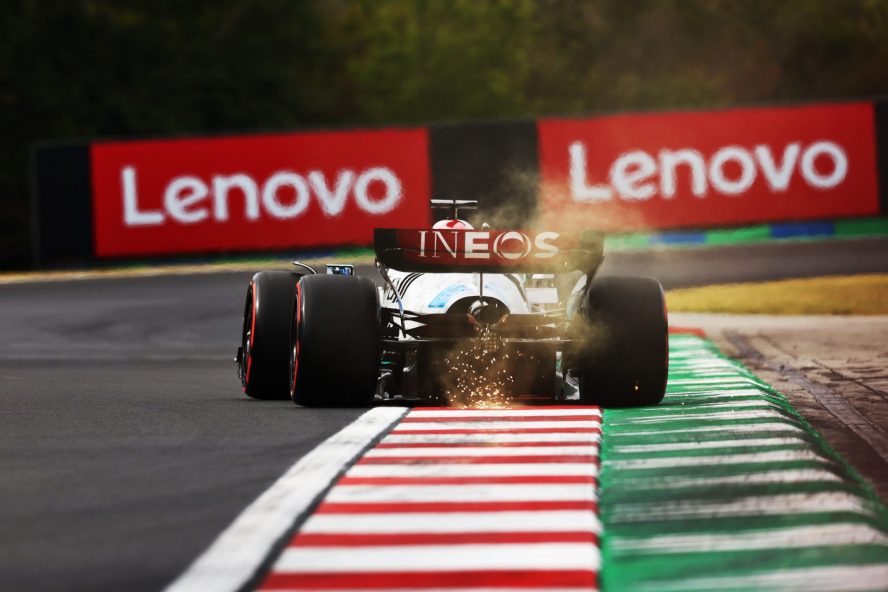 BUDAPEST, HUNGARY - JULY 30: George Russell of Great Britain driving the (63) Mercedes AMG Petronas F1 Team W13 on track during qualifying ahead of the F1 Grand Prix of Hungary at Hungaroring on July 30, 2022 in Budapest, Hungary. (Photo by Francois Nel/Getty Images)

Find out who went fastest at the Hungaroring

George Russell qualified fastest for the first time in his Formula 1 career, ruining Ferrari’s 1-2 in Hungary.

The Englishman put down a consistent lap, getting personal bests across all sectors on the final lap. His teammate Lewis Hamilton couldn’t keep up with his teammate finishing seventh fastest.

Carlos Sainz looked to have secured another front row start alongside his teammate Charles Leclerc right until the Russell spoilt his day at the very end of Q3.

Red Bull put on a horror show during qualifying with Sergio Perez getting knocked out in Q2 and Max Verstappen losing power at the end of Q3.

Lewis Hamilton and George Russell were the first and second fastest during the first round of Qualifying one after putting on a new set of tires. The Silver Arrows leapfrogged Ferrari’s Carlos Sainz and Red Bull’s Max Verstappen who were third and fourth fastest.

McLaren continued with their pace from Free Practice One, with Lando Norris and Daniel Ricciardo going fifth and seventh fastest.

Charles Leclerc did the bare minimum to make it through Q1, finishing ninth fastest.

AlphaTauri’s dramas. continued as Yuki Tsunoda and Pierre Gasly were knocked out in Q1.

The pain didn’t stop for Sebastian Vettel this weekend. After announcing his retirement from Formula 1 at the end of the season, the German shunted his car into the wall during Free Practice Three and was knocked out in Q1 for the first time in Hungary since 2009.

Nicolas Latifi and Alex Albon both had their chances to proceed through to Q2 however driver errors saw the Williams drivers knocked out after the first round.

Whilst Max Verstappen returned to the top of the leaderboards after the second round of qualifying, Sergio Perez was knocked out after Kevin Magnussen was in the Mexican’s way on a flying lap.

Perez’s unfortunate round of qualifying began with his time being incorrectly deleted due to track limits, the FIA reinstated Perez’s however the Mexican was forced to finish 11th fastest.

Alfa Romeo’s Zhou Guanyu revealed that he is  “happy” with the car this weekend despite narrowly missing out on Q3, his teammate Bottas advanced.

Haas’ new upgrades which strongly resemble the aerodynamic design of that of the Ferraris, didn’t work out as planned as Kevin Magnussen and Mick Schumacher exited the second round in 13th and 14th.

Q3 – Ferrari and Mercedes capitalise on Verstappen’s loss of power

Out of nowhere, George Russell soared across the finish line in Hungary to undo all of Ferrari’s hard work this weekend. Mr. Saturday will sit on pole for the first time in his F1 career ahead of the two Ferraris of Carlos Sainz and Charles Leclerc.

Lando Norris rounded up the top four, the Englishman will start on the second row after a tough run in recent races.

Alpine locked out positions fifth and sixth, keeping a Lewis Hamilton’s Silver Arrow at bay behind them in seventh. Hamilton failed to keep up with his teammate after a DRS issue, which saw him unable to complete his lap.

Alfa Romeo found their early season speed and finished in eighth ahead of Daniel Ricciardo in ninth.

Max Verstappen rounded out the top ten after losing power at the end of Q3.