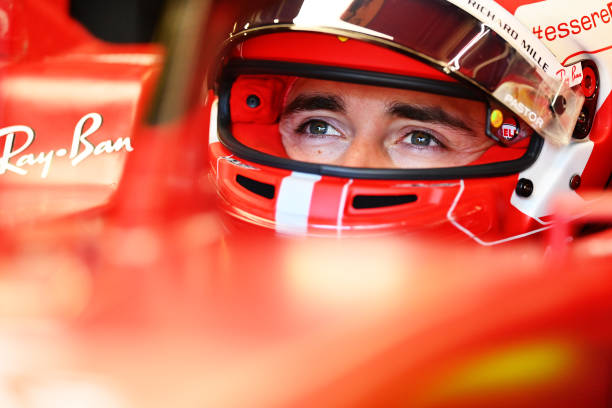 BAKU, AZERBAIJAN - JUNE 11: Charles Leclerc of Monaco and Ferrari prepares to drive in the garage during final practice ahead of the F1 Grand Prix of Azerbaijan at Baku City Circuit on June 11, 2022 in Baku, Azerbaijan. (Photo by Dan Mullan/Getty Images)

Charles Leclerc took pole for the second time in Baku with a time of 1:41.359, being the only driver ever to do so.

For round eight of the Formula One 2022 season, the paddock was in Baku for the Azerbaijan Grand Prix. This afternoon (UK time), we saw the drivers take to the grid for Qualifying.

The Baku circuit is a street circuit but very different to Monaco, which saw some frustrations among particular drivers as pitstop strategy was vital. Overtaking is much easier here with some long straights and 20 corners. From all three practice sessions, it has been incredibly close between Ferrari and Red Bull with Charles Leclerc going fastest in FP2 and Sergio Perez going fastest in both FP1 and FP3.

In 2021 we saw four red flags in Qualifying and after Formula 2’s Sprint Race earlier today, no one could predict what would happen in today’s Qualifying session. With the session being slightly delayed, the track for Qualifying was 10 degrees cooler than FP3.

So, let’s get into what happened in Qualifying at the Baku circuit.

Cars lined up in the pitlane, ready to make their way out on track. Lando Norris was at the front of the train, trickling out onto the track. He set the benchmark time at 1:45.061.

This time was immediately beaten by both Alpines and Pierre Gasly. Daniel Ricciardo also went faster than his teammate, which despite being early in the session, is promising for the Aussie. More and more drivers started to set times, and by no surprise, the Red Bulls topped the time sheets.

An interesting radio message was heard from George Russell: “Verstappen is driving in an erratic manner.” The Brit compromised his first lap, letting the car warm up before he set another lap going into the top four. Lewis Hamilton, however, went back into the pits after completing one lap.

Unfortunately for Mercedes, the W13 was suffering from porpoising again. When Hamilton completed another lap and set another time, he only managed to put himself in eighth.

Lance Stroll for Aston martin brought out some yellow flags as he end up in the barriers but managed to get the car back on track. Sadly, the bad news for the Canadian continued as he hit the wall between Turn 2 and Turn 3. This then brought out a red flag, suspending the session.

Car wouldn’t turn enough into turn 2. Work to do again for the Aston mechanics for tomorrow.

For Stroll, this was the third consecutive Q1 elimination at Baku. The bottom five at this point, with 2 minutes 30 seconds left on the clock, were: Alex Albon, Valtteri Bottas, Nicholas Latifi, Lance Stroll and Mick Schumacher.

In the pits, all drivers lined up with the Mercedes and Alpha Tauri’s at the front. When they all made their way out back onto the track, Norris was told “elbows out” as both McLarens were currently safe. Schumacher, however, tried to pass Norris as he was a driver at risk.

It was almost as if all the drivers were racing as they all tried to complete the fastest laps. Hamilton stayed in ninth, whilst Russell went up to sixth. A yellow flag was then out in Sector 2 as Fernando Alonso went down an escape road. Albon wasn’t too pleased with the Spaniard’s move as he said “he needs to get penalised…he braked so early and then just went off the circuit.” Valtteri Bottas was at risk but he continued his streak of getting into Q2 for the 144th time.

The five drivers who went out in Q1 are:

Only Ferrari and Red Bull have been in Q3 at every race this season and it looked like this would continue. Red Bull set the fastest time with Verstappen leading on a 1:42.227. This was soon beaten by Sainz and Leclerc, who went P1 and P2 respectively.

As the clock counted down, Hamilton was looking to be at risk. He was down in 11th, whilst Russell was sat in sixth. Whilst there was a difference between the Mercedes teammates, Aston Martin saw some similarities. Sebastian Vettel also ended up putting his AMR22 into the wall but at Turn 15 instead of Turn 7. However, he managed to get back to the pits.

Perez on setting his lap of 1:41.955, had a very close call with the wall but thankfully narrowly missed it. Verstappen later on in the session did clip the wall slightly though.

Hamilton was two one thousandths of a second outside the top 10, when a race control message popped up. He would be investigated after the session for driving unnecessarily slowly. However, Alonso’s incident in Q1 that Albon was frustrated at, needs no investigation according to the stewards.

Russell helped Hamilton get out of the bottom five by giving him a slipstream, putting the seven-time world champion into sixth. As Hamilton got into Q3, Norris bumped down to 11th going out in Q2.

The five drivers out in Q2:

The remaining cars went out on track to finalise the starting grid for tomorrow’s Grand Prix. Hamilton went third, 0.548s behind Russell, who got the tow from Hamilton on used tyres. But as the Ferraris and Perez completed their laps, the order changed.

Sainz went first followed by Leclerc, and whilst Verstappen had purple sector 2 and 3 times, he only managed to go fourth fastest behind Perez. However, the Red Bulls are nine kilometres faster than the Ferraris.

With five minutes to go, the timesheets saw four cars in the 1m 41seconds – I’m sure you can guess who they are. Drivers once again left the pits ready to set their final laps, but Perez had an issue with his car meaning Verstappen went out first.

Sainz went out before Leclerc and Hamilton went out ahead of Russell. The slipstream will definitely be playing a part in the final dash for pole position.

Leading the pack, Sainz began his lap but grazed the wall. Thankfully, he managed to continue driving but his provisional pole didn’t last long.

The hunt was on as Leclerc was going faster and faster, half a second up, and set a time of 1:41.359. This put the Monegasque on provisional pole, making him the only driver to be on pole here in Baku more than once.

Verstappen couldn’t beat Leclerc’s time as he went second. Perez bumped Verstappen down into third as the Mexican completed a great lap.

Leclerc has pole but will he be able to turn it into a race win tomorrow?

Starting Grid for the Grand Prix: