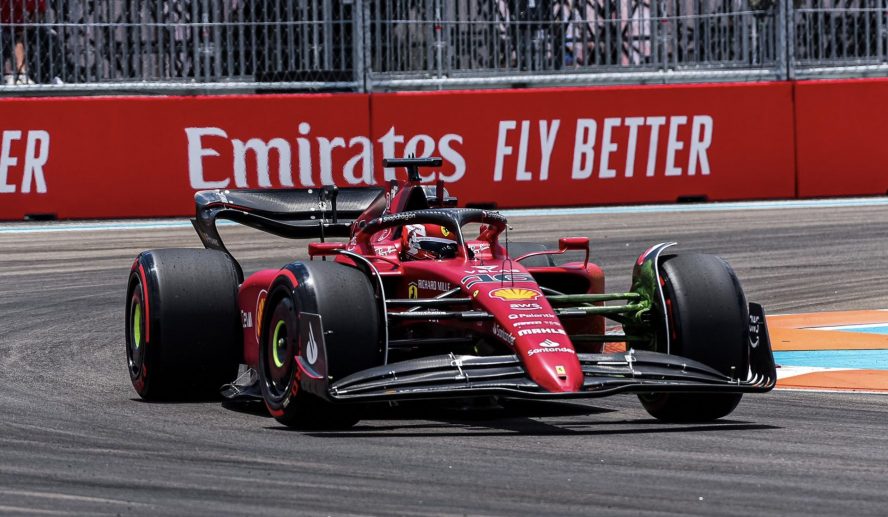 Qualifying: Ferrari Finished Fastest With A 1-2 in Miami

Charles Leclerc finished first with the fastest lap at qualifying in Miami.

Teammate Carlos Sainz secured P2 to make all the fans go crazy wild with cheers in the grandstands.

Drivers tried to stay off the line. Precision and speed was key. The C4 soft tyres were the best as track temperature rose to 52°C.

Lando led the way with a basketball inspired helmet design. For early times, Max managed a 1:30:235. With so many turns, there were quick and slow corners to take on. Red Bull were strong from the start.

It was scorching hot when Lewis Hamilton had to counter steer. He went too deep on the way into Turn 8. This resulted in an unfortunate slide. The Brit lost time there.

Ferrari fought hard to up their keep pace. Charles claimed a 1:29:474 to impress the crowd. The Monegasque was fastest overall.

McLaren made moves to the top. Turn 17 where repairs were recently done allowed for more downforce for drivers to break and then accelerate ahead. Some missed the opportunity and were left at risk such as Alex Albon who wasn’t able to warm up his tyres in time to even participate.

Mick Schumacher soared along well against the elevation changes across the track. The Haas team looked hopeful in the garage.

Ricciardo revealed his skill heading into the apex, almost going off track. Russell was bouncing loads at 165 mph. The 24-year old struggled in the corners.

Tsunoda swiped the wall a bit. It was a close call for the Japanese driver. His AlphaTauri took a time of 1:30:280. It was enough.

😫 So close, our lap was spoiled. Fernando had traffic from SAI, and was unable to improve.

Fernando Alonso missed merely by seconds to continue on. The Spaniard seemed disappointed. It’s the first time this season that he’s out in Q2. Hard times there.

Leclerc and Sainz sailed into turn 8, 9 and 10 too well. The Ferrari looked light and in control. There were only a few seconds between the two drivers.

Both Bulls in the shootout 🙌 P2 for Max, P4 for Checo! pic.twitter.com/VMrd7r9bAg

Carlos came back to surprise all right at the end. It was intense. It’s going to be an interesting start on grid.

Charles Leclerc is our first-ever-pole-sitter with a 1:29:474 time in Miami. Let’s see if the Prancing Horse can finish the job tomorrow.