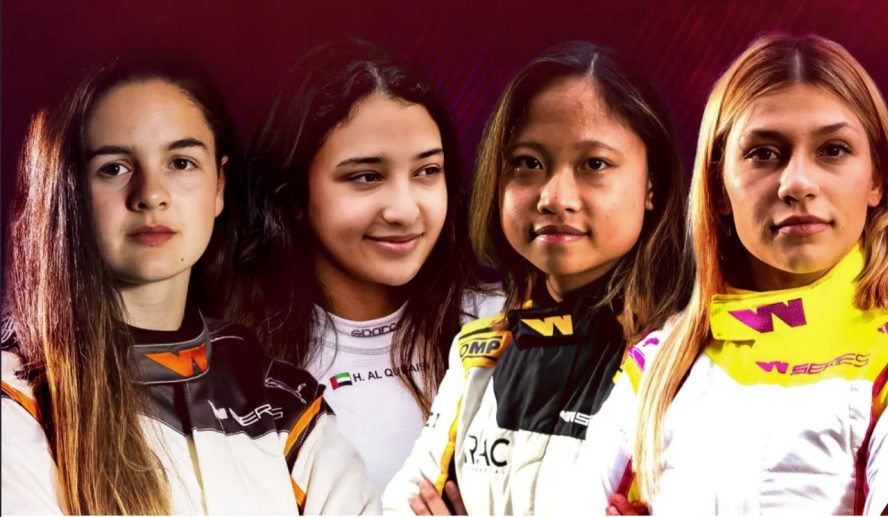 Pulling, Marti, Chambers and Al Qubaisi reflect on their F3 test and the “biggest challenge”

Females in motorsport are becoming increasingly more common with more and more people trying to expand the inclusivity within the industry. As the feeder series of F2 and F3 are the route into Formula One, the FIA arranged the second all-female F3 test.

Three W Series drivers took part as well as Hamda Al Qubaisi, who races in Formula 4 and Formula Regional. Al Qubaisi tested on the Friday along with Abbi Pulling. Chloe Chambers and Nerea Marti tested on the Saturday. Marti stepped in for the test as Tereza Babickova had to pull out due to a spinal injury she suffered. Marti took part in these dedicated F3 tests last year.

Ahead of the test, F3 CEO Bruno Michel expressed how important it is for the championship to “ensure that more and more female drivers join” the series. Michel said that it would provide the four females with “an opportunity…to understand what is required from an F3 driver from every aspect.”

The women all expressed their excitement about being able to complete the tests around Magny-Cours. Pulling said it “means a lot” to her and she was expecting it “to be very different” to what she’s used to. She’s currently fourth in the W Series standings. That’s 17 points ahead of Marti in sixth and eight points ahead of Chambers in 16th.

First day of the tests

Victor Martins, the FIA F3 2022 Champion, was present at the tests. He acted as a reference driver and coach for the women.

The test began with Pulling and Al Qubaisi taking to the track, after Martins set a reference time. The two were settling into the car, trying to get comfortable in the cockpit. In the afternoon, once they’d done some short runs, the two completed qualifying and race runs.

Pulling and Al Qubaisi did two qualifying runs each on fresh tyres, followed by 12 laps in race conditions. This included having a race set-up and a high fuel load, mirroring an actual race. Both completed 50 laps in total.

When speaking about the tests, Pulling said “there was a lot to learn” about the car and herself. She said:

“I came here with a big smile on my face. I really enjoyed it a lot. It’s been really amazing to work with the F3 teams. It’s been a productive day.”

Pulling spoke about specific areas that were quite tricky. She said “the tyre warm-up procedure is quite different from what I am used to.” But the “biggest challenge” was “the aero, the downforce is massive.” Pulling said that “once you realise that when you go faster actually you get more grip, it’s better.”

However, the think she “liked the most about the car was the braking.” Pulling said, “you can really put your whole body behind it and the car really stops.”

“I learned so many things from this test to take away, more than anything I’ve probably ever learned. I want to take that with me for the future and to hopefully be in the Championship one day…”

Al Qubaisi shared Pulling’s gratitude. She said “it’s been such an amazing experience.” Initially, she “was shocked with the speed and the downforce”. But eventually, she got more “confident in the care”.

The F4 and Formula Regional driver said that the biggest lesson for her was “the braking”. Al Qubaisi commented saying that “you really have to put really high pic pressure in these cars, and I wasn’t used to it. I had to focus on brake pressure and trying to get that pic.” However, she did feel that in “slow speed corners,” she was “efficient with the brakes throughout the runs.”

“I think it is a really good step forward, and I had a really good feeling with the car. I think for the future, this test will help a lot. This is a taste of what an F3 car is. To have this feeling is important for my future. If I am to step up to this Championship, I would say today really helped me a lot.”

By Francesca Herring6 days ago

The second day of testing

Marti and Chambers took to the track on Saturday, making it Chambers’ first time in an F3 car. The day followed the same structure as the first day, with qualifying and race runs in the afternoon. Again, both drivers completed 50 laps with Martins as the reference driver and coach.

Both Chambers and Marti spoke about their day at Magny-Cours.

Chambers said that she “definitely learned a lot” and she “made some improvements.” When speaking about the most challenging thing, the W Series driver said it was “trusting the grip of the car.”

Elaborating on that, she said that she’d “never driven a car with this much downforce and these soft tyres.” When comparing it to the W Series car, Chambers said “there are huge differences” so it will take “some time to get used to.”

However, Chambers did conclude on a positive saying:

“The car is just so incredible to drive. It’s definitely a big step-up, but obviously it’s going to help me in the long run.”

Marti had similar comments to all the other drivers, noting areas of improvement such as “in the fast corners and braking”. But, since she completed the test last year, Marti focused on “extracting the best of the old tyres”.

The Spaniard said that she gave her all and “improved throughout the day.”

All four drivers also commented on the presence of Martins being there as the F3 champion. They all agreed that he was “very helpful” and it was “beneficial” to have him with them.