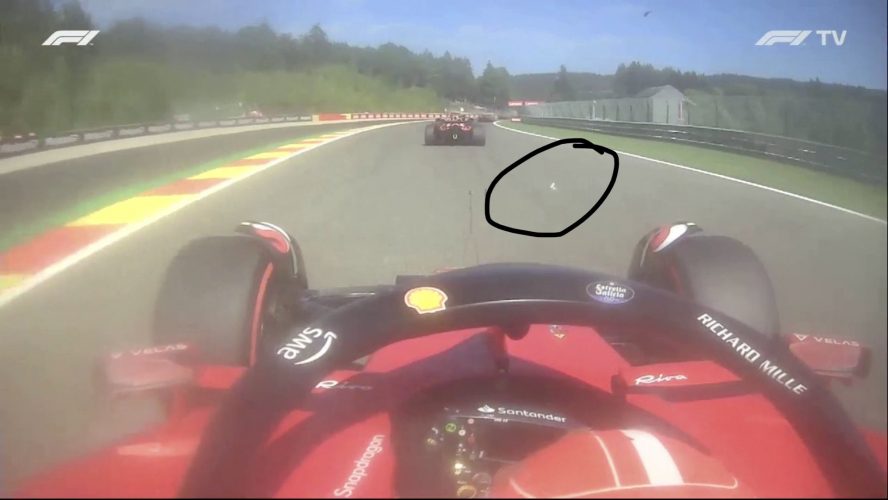 Twitter sleuths have discovered that Max Verstappen may have been responsible for Leclerc's unfortunate early pit stop.

Do you know what a tear-off is? Max Verstappen’s tear-off was the one that caused Charles Leclerc’s early pit stop.

In yesterday’s Belgian Grand Prix, Leclerc had to make a very early pit stop which sent him to the back of the pack. This happened while his main rival charged through the field from P14.

It was quickly concluded that the reason Leclerc had to pit early was that a visor tear-off was caught in his brake duct.

For those of you who don’t know what a tear-off is, they are multiple layers of film placed on the driver’s visor. When the film gets too full of dust and other things, a driver can just rip it off and have fresh vision once again.

Drivers get rid of their tear-offs all the time. It’s common to go through many tear-offs in a single race. The proof that Verstappen’s tear-off was the one that ended up in Leclerc’s brake duct is just unfortunate. It is a very rare occurrence. Despite it being statistically very rare, it was the one that caused Leclerc’s early pit stop.

After the pit stop, it was unknown which driver’s tear-off it was as they all appear very similar. However, some Twitter sleuths, and Ferrari themselves, have investigated onboard footage from the opening lap. It’s been concluded that it was Verstappen’s tear-off.

As seen in the video above, Verstappen gets sprayed with a lot of dust and debris at around the 1m25s mark. Understandably, he can then be seen ripping off the tear-off. Even the onboard camera had poor “vision” and was visibly clouded up.

The following tweet shows the onboard cameras of both drivers at the time of tear off. It shows that it was right in the path of Leclerc.

Photos from lap 1 of Max removing his tear off, and Charles right behind… pic.twitter.com/qtMN6YLFd2

When asked why Verstappen removed his tear-off on lap 1, although we now know from the footage, the Dutchman said it was because the visor was dirty.

“It was super hectic, and so much dirt as well. I pulled off my tear-off because I barely could see anything just because of the previous sector”

When asked by motorsport.com about Leclerc’s early pit stop, Verstappen admitted that it was unlucky and how he hoped it wasn’t his tear-off.

“I hope it’s not mine. But there was a lot of stuff,  honestly people… they were all pulling stuff out and it’s just super unlucky, to be honest, that that happens.”

He also admitted how something like that happening is a “nightmare”.

Although all the evidence does show that it was Verstappen’s tear-off, it was just an unfortunate incident. Many Ferrari fans will say it could be malicious, as they already have done on Twitter. On the other side, Red Bull fans will say they’re being ridiculous.

With all of Leclerc’s bad luck recently, it’s understandable why Ferrari fans want to blame something. But, this again was another case of bad luck.