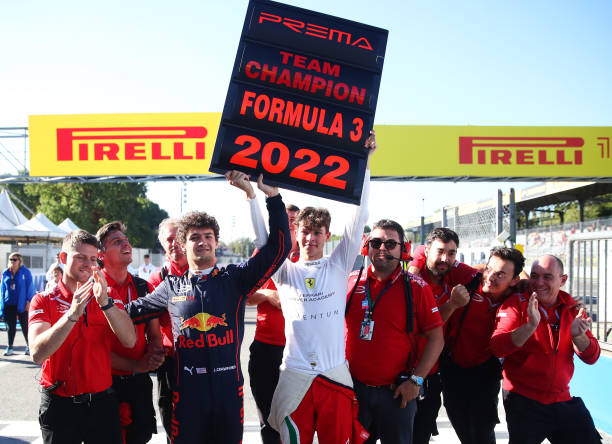 The British driver joined the Ferrari Driver Academy in November 2021.

After narrowly missing out on the F3 title, Ollie Bearman is expected to impress as he moves up to Formula 2.

At just 17 years old, the Brit is rapidly sailing through the lower formulae. He claimed victory in two F4 series and is considered a rising star by the BRDC.

His maiden season in F3 with Prema got off to a rocky start, but by the end of 2022 team principal Rene Rosin had only positive feedback for the young racer.

Bearman competed for Prema Racing, partnering Jak Crawford and Arthur Leclerc. Both of his teammates were in their second season of the series, leading many to expect that they would lead the Italian outfit.

Whilst the Brit claimed a podium in his debut race, this was followed by a run of disappointing results marred by avoidable mistakes.

In an interview with Formula Scout, Rosin explained the tricky start to the year. He said: “Honestly, the plan with Ollie had always been to take a season to grow.

“He made a few mistakes in the first two rounds, where he compromised a bit the results. In Bahrain because of track limits, they took the win away from him. In Imola, he was leading, then he overpushed, destroyed the tyres and crashed with [Gregoire] Saucy.”

Bearman finished the season on 132 points, just seven shy of champion Victor Martins. In addition, he culminated an impressive seven podiums and one race win.

“He has done everything the proper way. I’m really happy about the job he has done with us. An amazing season.”

Whilst it was a promising debut for the young Brit, the title decider in Monza may always be a question of ‘what if?’.

The race ended under red flags, resulting in a period of time where no one was quite sure who had won the championship, which Rosin called “quite a disappointment”.

He said: “We are discussing with the promoter and the FIA that this should not happen again because the result needs to be done properly on track with the full race distance. We waited such a long time that I think somehow we could have done the 15 minutes of the race.”

The F3 drivers graduating to F2

Bearman is set to continue with Prema. However, he will not be the only competitor making his Formula 2 debut this season.

His ex-teammate Leclerc will join DAMS, whilst Crawford drove for Hitech GP in the post-season test. The latter has been confirmed to race part-time in Formula Regional Middle East.

Furthermore, Brad Benavides will race for PHM Racing by Charouz as Trident promote Roman Stanek to their F2 team.