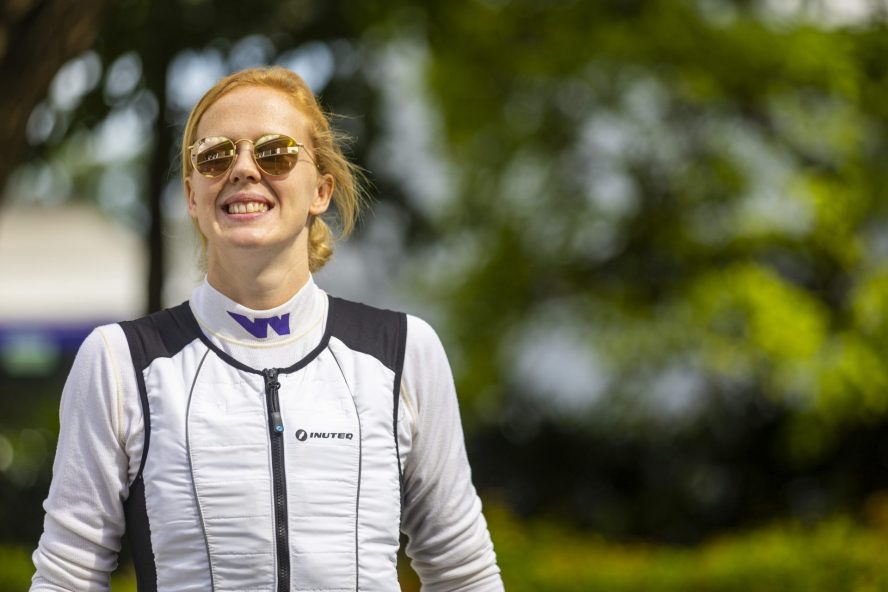 Powell: “Championship? In W Series anything can happen”

The Brit conquered another podium in Singapore

The Singaporean weekend was not the easiest for Championship leaders. The biggest surprise from W Series came from 2-times Jamie Chadwick. Expected to clinch her third title in Marina Bay, Chadwick didn’t look comfortable with the car after free practice and eventually ended up retiring from the race after a rare mistake. The Brit later took her disappointment on social media: “Sorry to my team – only myself to blame today but we will learn and come back stronger.”

Arghh 💔 Sorry to my team – only myself to blame today but we will learn and come back stronger 💪🏻 pic.twitter.com/wH7pv4aILg

Visser: “A relief to win”

The other side of the medal this time was for Beitske Visser. The Dutch driver finally conquered her second victory in W Series and went on to express her happiness in the press release:

“I was very happy with that one. It is such a relief to get the win and I’ve been waiting for it for a long time. I think it’s been coming for the last few races as we’ve always been there.”

A stellar start got Visser the first position, which she was then able to maintain despite Powell’s attacks: “I got a good start and in the first few laps I was very strong. Alice was a bit quicker after that, but I managed to hold her off and at the end I was strong again. I had to defend from her once, but after that, I knew at which points I had to push to make sure she couldn’t try a move and then it was fine. I was a bit worried about the start of the race as they changed my clutch a bit from yesterday for the biting point and it was a bit of a guess, but thankfully we guessed right!”

Powell: “Anything can happen”

Another driver leaving Singapore on a high will be Alice Powell. After a tricky start of the season, the Brit successfully recovered and, despite only finishing in second, the pace shown during the weekend was convincing: “The start was really good and once we got past Marta the gap to Beitske was two and a half seconds, but we pulled it in and had the fastest lap by five tenths.

The car was amazing but when we caught Beitske it was so hard to follow and I couldn’t get past. Fair play to Beitske, she drove fantastically, kept her cool and it was up to me to make her make a small mistake or for her car to really go off. Then, my car went off and the front tyres totally gave up as we were following her so closely for so long.”

Powell is currently third in the Championship with 86 points behind Visser (93) and Chadwick (143), while the teams’ standings see Click2Drive Bristol Street Motors Racing in second behind Jenner Racing. The weekend in Singapore, however, opens up to new hopes: “A big shout out to Daz, Tom and Cameron – they have done an amazing job for the Bristol Street Motors Team all weekend.

Obviously, we have dropped down a little bit in the championship, but there are still three races left and this is W Series where anything can happen. I’m looking forward to it.”