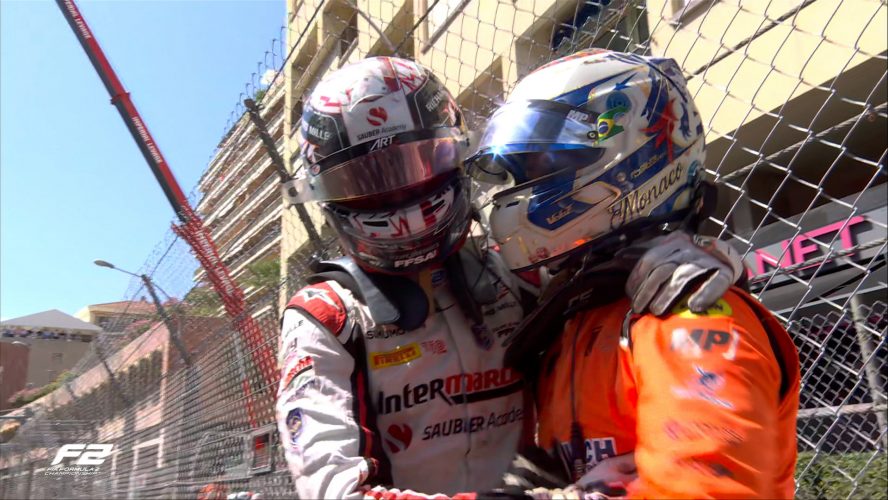 Pourchaire: “We have to improve” quali after Baku

Felipe Drugovich extended his Championship lead by 49 points leaving Round Six in Baku after a consistent weekend. Theo Pourchaire sits behind in P2 separated from PREMA’s Jehan Daruvala by only ten points.

The ART Grand Prix driver has been very inconsistent during qualifying this season. He had a strong start to the season qualifying P2 in Sakhir. This then dropped to P20 in Jeddah after suffering issues and stopping on track. Moving into Imola and Barcelona, Pourchaire qualified P7 in each session respectively. He then showed improvement in Monaco after qualifying top of Group B and P2 overall. He was left disappointed in Baku,  however, only managing to set a lap fast enough for P12.

After qualifying P12 in Baku, Pourchaire has addressed the team’s issues. Speaking to Formula 2, the ART driver said:

“I think in Quali, we’re not good. We’re still not the best. We have to improve the Quali.”

Pourchaire goes on to say that the main focus for the team now should be maximising their one-lap performance.

With the Championship heating up, the Sauber Junior knows he needs to start closing up on championship rival Felipe Drugovich. He also, however, knows the challenge he has on his hands saying “Felipe’s also consistent, that’s the problem!”

Championship leader Felipe Drugovich, however, had a very clean consistent weekend. The MP Motorsport driver qualified P5 managing to convert this into P3 in Sunday’s Feature Race. This result, alongside his P5 in the Sprint Race, allowed Drugovich to further extend his lead over Pourchaire.

Speaking about his Feature Race performance to Formula 2, the Brazilian driver said: “I was really on the limit every time. At the same time, I was also trying to be really safe, because we’re focusing on the points now.”

He moved onto say that “I think getting a P3 here is extremely good for us. I think that’s what we did, until the last of Safety Car where I had a touch on the wall we kept it clean mostly.”

When speaking about his Championship lead, Drugovich is keen to not get ahead of himself commenting “Obviously, it’s very nice, it makes you feel a little bit more relaxed. At the same time, it doesn’t mean much now. If you see how many points are available throughout the year, it’s not a lot.“

He goes on to say that the main aim in the season is to focus on the championship and balance the risk and reward knowing how quickly the tables can turn.

“I need to think about the championship now. I need to score points and I need to be aggressive but safe at the same time. There’s a compromise for everything and I’ve been doing that the whole year and it’s working.”

Speaking to FormulaNerds about Round 7 at Silverstone, the MP driver said it’s his “favourite”, moving on to say “I love the track.”

Drugovich will be hoping to have another strong consistent round here. Pourchaire on the other hand will be looking to make improvements to close the championship gap.

Formula 2 returns at Silverstone for Round Seven (1st-3rd July)