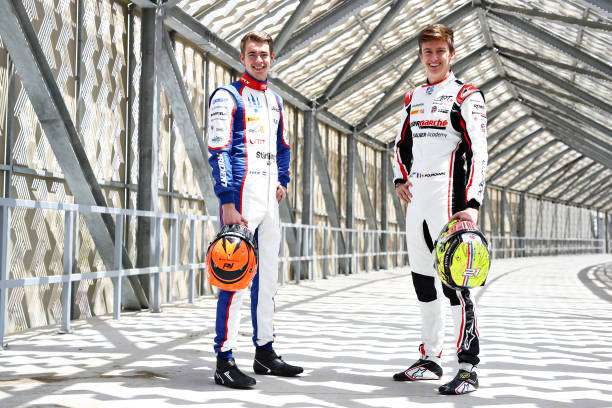 JEDDAH, SAUDI ARABIA - MARCH 24: Sprint race winner Richard Verschoor of Netherlands and Trident (20) (L) and Feature race winner at Round 1:Bahrain, Theo Pourchaire of France and ART Grand Prix (10) (R) pose for a photo during previews ahead of Round 2:Jeddah of the Formula 2 Championship at Jeddah Corniche Circuit on March 24, 2022 in Jeddah, Saudi Arabia. (Photo by Joe Portlock - Formula 1/Formula Motorsport Limited via Getty Images)

Pourchaire & Verschoor: Silverstone is “tricky” but “one of the best”

Pourchaire and Verschoor gave their views on Silverstone.

FormulaNerds spoke to Pourchaire and Verschoor ahead of round seven of the F2 Championship at Silverstone.

Two key drivers to focus on this weekend are ART Grand Prix’s Théo Pourchaire and Trident’s Richard Verschoor. FormulaNerds spoke to both drivers yesterday about their thoughts on this weekend and the Silverstone circuit.

In 2021, Verschoor was a Sprint Race winner at Silverstone. This season, he has only achieved one race win in Bahrain. He won the Sprint Race being the first race winner of 2022. Verschoor currently sits 11th in the Driver Standings for the Formula 2 Championship.

Pourchaire was not as lucky as Verschoor last season. His highest position over the whole weekend was P5. However, 2022 is a different story. The Frenchman sits 49 points behind the championship leader, Felipe Drugovich. He has also won two feature races this season in Bahrain and Imola.

Both drivers outlined their focus for this weekend and their thoughts on one of motorsport’s most historic circuits.

The ART driver is only in his second year of Formula 2, his fifth season in single-seaters. He has proved himself as a very strong contender for the championship this season. However, he still needs to catch Drugovich, but Silverstone could be the track to do it.

When speaking about the circuit, Pourchaire expressed his love for the British track. He said “it’s really good to be back here at Silverstone” because it is his “favourite track in Europe with Monaco.”

Racing in Monaco proved to be Pourchaire’s best weekend overall this season with a P6 finish in the Sprint Race and a podium in the Feature Race. If his love for the track aided his performance in round five, we could see him equal, or better, that result this weekend.

Pourchaire also commented on some key parts of the track that make it “very good to drive” but also the parts that could impact a result. He spoke about the “high-speed corners” and the occasional “blind corners” all contributing to the “beautiful track”. Continuing, he said that the “adrenaline on that track is amazing”, specifically in “quali”.

He reflected on last year as well saying that the Silverstone circuit is “very good” for “first lap battles”. With it being a more traditional circuit and open-flowing compared to others, like the streets of Baku, overtaking is somewhat easier. However, Pourchaire noted that it can be “tricky to overtake”, making qualifying “even more important.”

With the track around the middle of England, it’s only right to mention English weather. Pourchaire said that “it’s going to be tough” this weekend “because the weather looks tricky.” He mentioned there could be “a bit of rain, a bit of dry conditions”, which could shake up the field and alter strategies, proving for a very interesting race.

Verschoor’s season got off to a great start but recently he has been quite unlucky. In the previous four sprint races, the Trident driver finished outside the top 10. He replicated this in three of the feature races. However, last time out he achieved a P5 finish in the Feature Race in Baku.

But Silverstone is very different from Baku with different challenges. However, Verschoor’s love for the track still grows strong.

When speaking to FormulaNerds, he said that Silverstone is “one of the best tracks here in Europe”. He cannot wait to drive it and is “definitely looking forward to this” race on the calendar in particular.

Much like Pourchaire, Verschoor noted the “high-speed corners” being challenging, but he thinks it will be “exciting to see” what the weekend will bring.

Both drivers love this track and in motorsport history, there have been many famous moments here. Pourchaire said that Silverstone is not a “normal” race because of this history. But Verschoor said that he doesn’t let “what’s happened here before” really affect his mindset going into the weekend. He said “I don’t approach this race different than others.”

The Silverstone weekend will be key for the championship for Formula 2. But there is still a long way to go with seven rounds left after this weekend. Will Pourchaire be able to catch Drugovich? Will Verschoor replicate his success from last year?