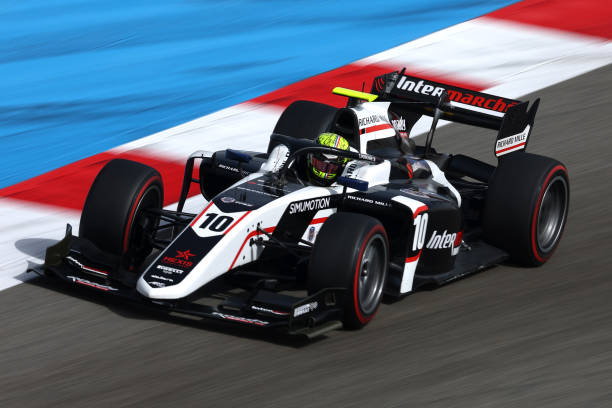 BAHRAIN, BAHRAIN - MARCH 20: Theo Pourchaire of France and ART Grand Prix (10) drives on track during the Round 1:Sakhir Feature Race of the Formula 2 Championship at Bahrain International Circuit on March 20, 2022 in Bahrain, Bahrain. (Photo by Lars Baron/Getty Images)

The problems started as Dennis Haugher stalled on the grid at the start of the formation lap having to be pushed to the pitlane.

Lights out showed a dramatic start with Vips taking the lead into Turn 1 with Boschung claiming P2 from a falling Doohan who took P3.

Lap 2 brought the safety car out as Vesti spun putting himself out of the race.

The safety car came in at the end of Lap 4 with Doohan taking the opportunity to overtake Boschung for P2. Pourchaire also used this time to push himself to P3 passing Boschung.

With Boschung falling down the order going through Lap 6 his teammate Olli Caldwell is handed a 10 second penalty for being out of position at the Safety Car line.

Moving on through to Lap 7 Armstrong started his own charge overtaking Boschung going into Turn 1 and a lap later overtaking Lawson.

Drugovich makes a gamble on Lap 10 coming into the pits early to swap for soft tyres to finish the race.

Throughout Lap 11 Armstrong continues his charge through the field passing Pourchaire on the main straight putting himself clear in P3.

Lap 12 provided us with plenty of midfield action as we see a battle emerging between Iwasa, Sargent, and Boschung, Iwasa getting the better hand moving himself up to P7.

Shortly after we see race leader Juri Vips called into the pits after maintaining a 5.4 second lead on Doohan. Unfortunately for Vips, the pit stop didn’t go to plan after an issue with the front left tyre. This brought Vips out into P12 starting his charge back through the field.

Moving on from this Doohan is brought in for his mandatory pit stop which for him goes well. He rejoins the track alongside Pourchaire in Lap 15 where the two collide, causing front wing damage for Doohan sending him back into the pits for a front wing replacement.

During this lap, MP Motorsport driver Novalak retired from the race with engine failure.

After starting from the back of the grid Iwasa is in the lead by Lap 16 however he still has to pit which he does 2 laps later. This then allows Pourchaire to take the lead.

PREMA driver Daruvala had front wing issues through the final sector of Lap 19 causing him to pit once again. For this he was also shown the black and white flags for track limits.

Lap 21 saw Vips making his comeback passing Boschung in Turn 1 for P4. Up ahead his former teammate Liam Lawson overtook Drugovich a lap later to move himself up to P3. Vips then doing the same on Lap 25 beating Drugovich and therefore taking the final podium position.

During this time Caldwell receives another 10 second penalty for exceeding track limits at Turn 4.

Moving through the race drama occurs once again throughout Lap 26 and 27 as Verschoor, Nissany and Sargeant all battle for P11. This occurs over two laps ending with Verschoor spinning after contact from Nissany bringing the Safety Car out. Taking to twitter shortly after the race Verschoor commented:

This is not racing. This is purposely driving someone of the track, not caring whether you will crash. This is over the limit and not acceptable, go choose another sport

Going on to say:

The safety car lead to plenty of activity in the pits. Hauger is the first to pit however lost a tyre in the process forcing him to retire. Following him closely in was Tridents Calan Williams who also loses a wheel during the pit stop also making him retire. These incidents caused the pit entry to be closed.

After the chaos caused in the pits it was announced that the Safety Car would be coming in at the end of Lap 30.

On the restart the front three maintained their positions with Theo Pourchaire taking his third win in FIA Formula 2.

The points were allocated as follows;

This takes Pourchaire into the lead of the Drivers Championship standings with 25 points. Lawson following closely in P2 with 24 points. Carlin leads the Team Championship with 33 points.

All results and standings can be found on the FIA Formula 2 website.