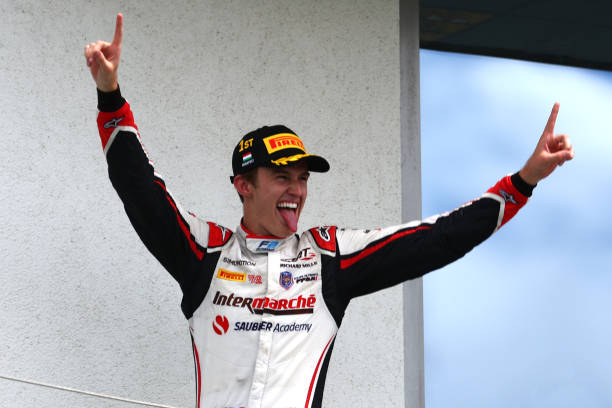 This year could be his last chance to win the title

Sauber Academy driver Theo Pourchaire has revealed that he will likely not be racing in Formula 2 next year.

The Frenchman is currently a title contender as he lingers 21 points away from rival Felipe Drugovich’s lead. But as France Racing reported, he will not try for the title again next season.

“It’s my last FIA F2 season, that’s for sure,” Pourchaire explained. “Financially, it won’t be possible. It’s not a good solution. Two seasons in a championship is enough for a driver.”

Could Pourchaire progress to F1?

With five seats on the 2023 grid currently unoccupied, there is the possibility for Pourchaire to use his F1 connections to grab an opportunity.

However, he admitted that racing in the upper echelon of motorsport is not his main priority:

“I don’t think about F1 at all. It’s still a dream for me. I’m happy to be racing in FIA F2 already. When I look back on my career and where I come from, I think that racing in F2 is already great. I’ll see. Maybe one day I’ll have the opportunity, maybe I won’t.”

One of the most impactful changes to the 2022 regulations was the introduction of rookies in FP1 sessions. Each team must give two rookies the chance to drive their car across the season. Pourchaire seems like a natural choice for Alfa Romeo due to their Sauber connections, but he is unsure whether he will get the chance.

He explained: “I don’t know if I’ll ride in free practice. It’s better this way, I stay focused on my FIA F2 season. If there is the opportunity, I will seize it.”

If he were to get a contract in F1 for the 2023 season, once again Alfa Romeo would make the most sense. Unfortunately for Pourchaire, it looks increasingly likely that the team will extend Zhou Guanyu’s deal.

NEWS | 🇫🇷 This will be most likely Theo Pourchaire's last season in Formula 2, his management confirmed to F1 Feeder Series.

"However, nothing is one hundred percent sure, because it depends on lots of things such as results and budget." #F2

He said: “He’s doing a perfect job in the car but outside of the car also, because he is a very good team player, a very good teammate. He’s always bringing extra motivation to the guys, he has a positive attitude, and this for us is a good push.”

Currently, all eyes are on that second Alpine seat. Could the team take a chance on Pourchaire, and have an all-French lineup? The possibility is certainly there.

In his second full season of Formula 2, Pourchaire seems to be continually improving. In 2021, he finished in fifth place in the standings with two wins to his name.

Of course, Oscar Piastri was the biggest name that year, but Pourchaire has undeniably stepped up his game in 2022.

He started off the season with a feature race win in Bahrain. As championship leader Drugovich found his feet, Pourchaire drifted behind. He still took victory in Imola and was on the podium in Monaco, but his rival began to run away with the title.

Lately, it seems that the Frenchman’s luck has turned as the gap in the standings has narrowed. One feature race victory and a poor race for Drugovich would see Pourchaire retake the lead in the championship.

If he does win, who knows what could be in store for the 18-year-old? With his future stretching out ahead of him, Pourchaire is certainly one to keep an eye on.