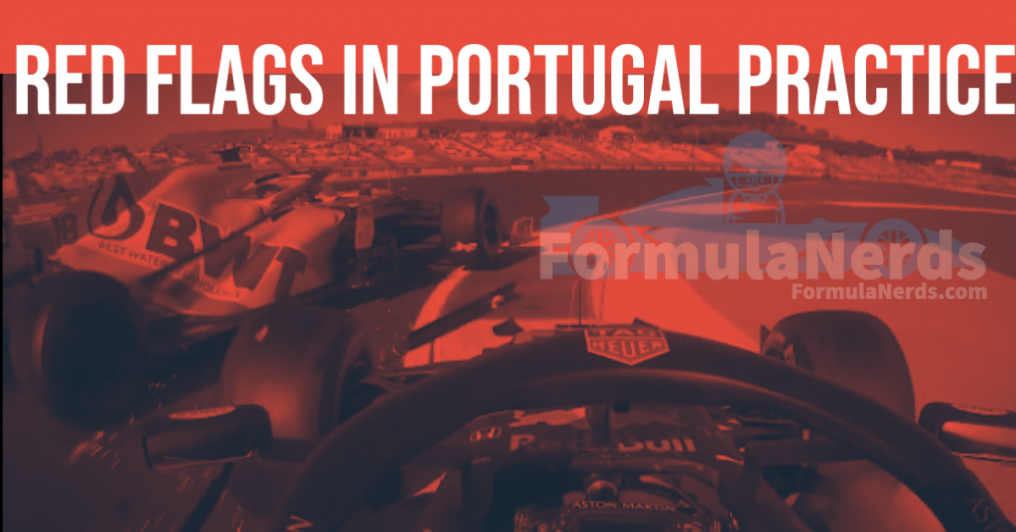 Friday’s free practice is meant to be a calm affair, with tyres and fuel loads tested and race strategies set, especially on a brand new track to Formula 1…

I don’t think the teams got that memo! We had drivers hot under the collar – for a few reasons!

Free practice 1 was a relatively calm period – with a few spins – as expected with the lack of experience of the track/conditions, but with all that it was still Mercedes who led the way, this time with Valtteri Bottas – followed in 3rd by Max Verstappen, as we’ve all been recently accustomed to. The time difference between the 2 teams (however) was striking – 0.781s between Bottas and Verstappen – even with Mercedes saying they are not using DAS for the first time this season – in preparation for this being removed in 2021.

Away from the leading 3, Leclerc again showed that he knows how to push the car to its limits (which includes their 3rd wave of upgrades this weekend) by taking 4th – however still nearly a second (+0.899s) behind lead man Bottas. His teammate Vettel managed 11th, but hopefully, he can too find the groove this weekend with the improved car and match the performance of Charles.

Verstappen’s teammate Albon started the weekend well – and didn’t let the ongoing pressure/rumours about potentially losing his seat in 2021 – with 5th place, even though he was complaining about his car being unstable at low speed.

The McLaren’s finished in 6th and 12th – with Carlos and Lando respectively, with Carlos one place ahead of the departing Sergio Perez in 7th. Completing the top 10, Kimi had a very strong finish to the session taking 8th, Ricciardo has something to build on in 9th and Pierre Gasly in 10th – even though he was carrying a mechanical problem……more on this soon!

Completing the final positions, Kvyat finished in 13th, the departing Magnussen in 14th – with teammate Grosjean 17th. Splitting the Hass’ were (now fit / well / covid-free / off the toilet again) Lance Stroll and Giovinazzi in 15th and 16th respectively. The final 3 places were George Russell in 18th, Ocon in 19th (who was only on hard tires during the session and also had a smoking car at the close of the session) and Latifi in 20th.

This (unbeknown to everyone) was the calm before the storm!! 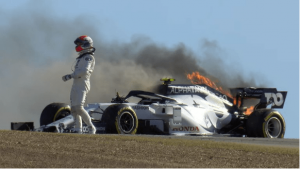 Before the action on track even started – it was confirmed that FP2 would be the place to have a 30min test the new Pirelli tire for 2021 (which personally I thought was strange as it’s a new track and the teams and Pirelli have no real data to compare against……anyway…). This shouldn’t really have been an issue – although I’m sure we did have the now race weekly comment on tires by Lewis – HOWEVER, the guys at Renault dropped the ball completely and fitted the left tire on the car from the 2 sets provided the opposite way round on Danny Ricciardo’s car! This is currently under review by the stewards (and at time of writing) we are yet to hear any punishment.

Ok, back to the on-track action and the non-complicated part of the session – Bottas was again fastest, this time +0.595s ahead of Verstappen and +0.803 ahead of a great 3rd place for Norris – who added a new song to his practice day repertoire, check our Facebook page for the video! Leclerc again in 4th and Sainz in 5th – great promise for Saturday for the 2 McLarens. Vettel was 6th (0.3s off Leclerc’s pace) but encouraging. Gasly (more on him below!) a solid 7th – ahead of the struggling champion-elect Hamilton in 8th. Rounding off the top 10 was Ocon and Albon – who could have been higher in the standings but had several lap times deleted for going over track limits.

11th was Russell (PLEASE REPEAT THIS IN QUALI…) ahead on Perez in 12th, Ricciardo in 13th (who had been blocked by the aforementioned Russell on a flying lap) and the 2nd Williams of Latifi in 14th.

The remaining places were filled by Raikkonen in p15, K-mag in 16th, Kvyat 17th, Grosjean 18th, Stroll (again more on him below) 19th and Giovinazzi 20th.

NOW you may have noticed I glossed over the finishing positions – as there were 2 red flags in the actual hour of FP2 (after the tire testing half an hour) for 2 big incidents!

First one started innocently enough with Pierre Gasly pulling over to the side of the track at the exit to turn 13, which soon turned to panic when flames started to appear at the exhaust area of his AlphaTauri, soon engulfing the whole rear of the car – finally being extinguished after a minute of burning by the on-rushing marshalls.

The 2nd incident was far more controversial. With around 25mins to go of the session, Verstappen and (everyone’s favourite driver) Lance Stroll were running together around turns 13 and 14. Verstappen let Stroll through during the final turn – thinking he could get a tow down the main straight to start his flying lap. However, Stroll didn’t realise this and maintained his position on the left-hand side of the main straight with Verstappen in the centre. Pretty sure everyone watching could see what was going to happen – with the exception of these 2! – who then collided on the entrance to turn 1  – prompting a 4, 5, 6….. letter tirade of abuse from Max about how blind Stroll was!! On reflection, Max maybe should have backed out of the corner slightly when he realised Stroll’s track position – but I’m glad I’m not the one who is able to tell him this! The stewards had their review and no further action has been taken – so they are clear for the rest of the weekend – although if this can happen in FP2 – what the hell will tomorrow bring!? 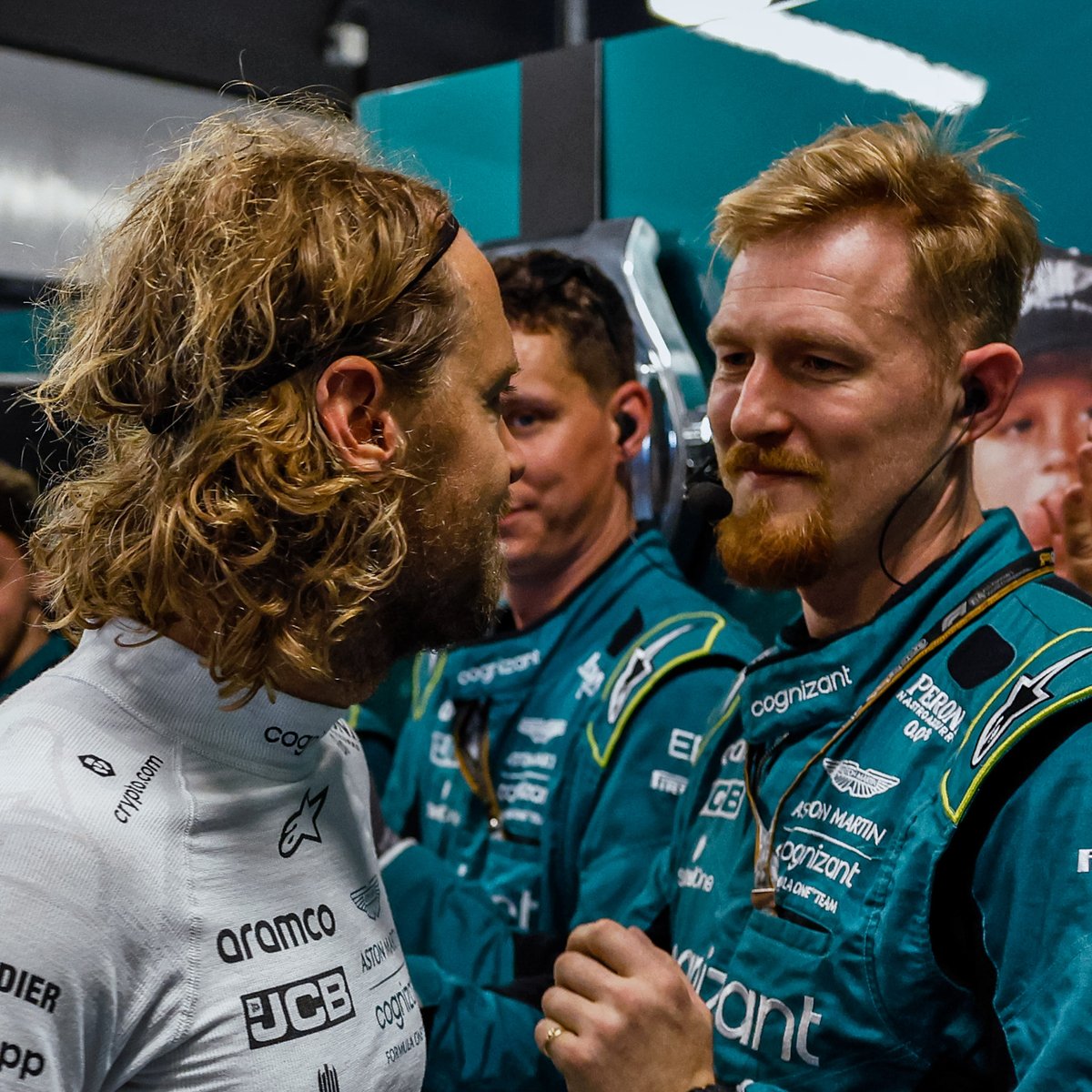