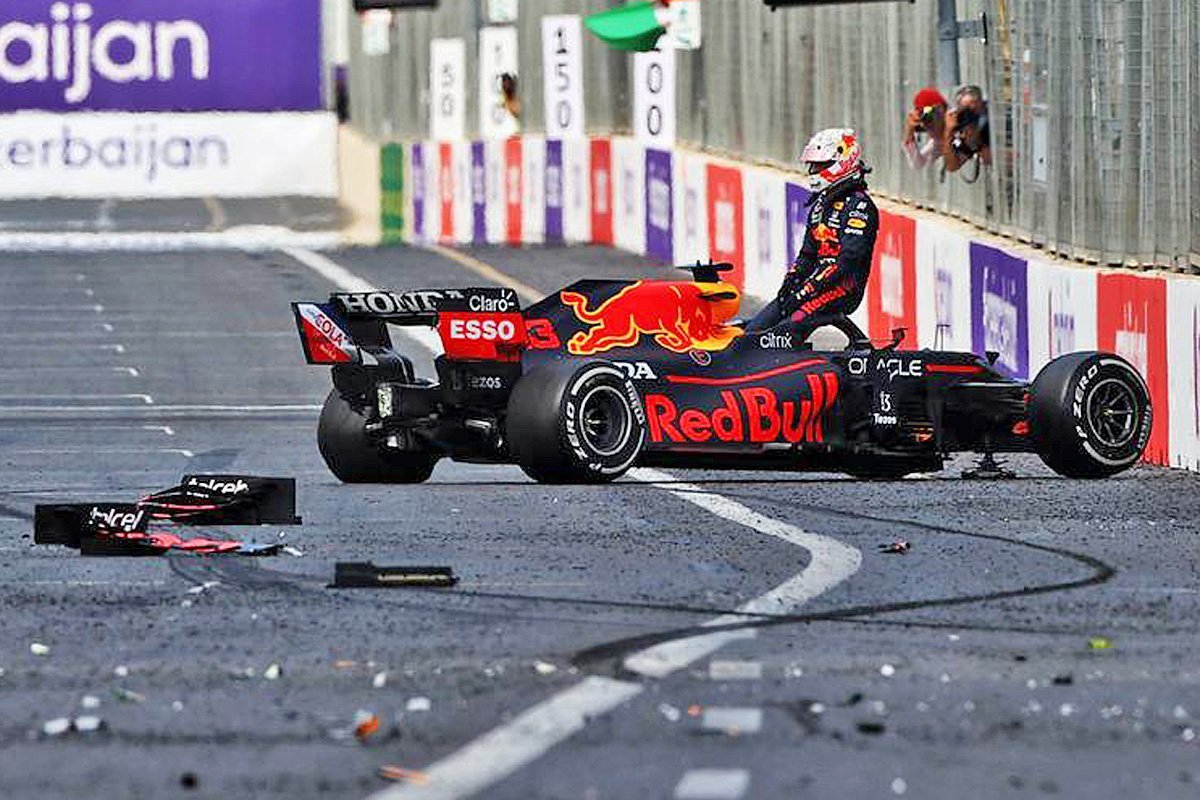 The Azerbaijan Grand Prix provided a shocking ending with the race leader Max Verstappen crashing with five laps to go for a  left-rear tyre failure after Lance Stroll had retired on lap 30 for the same problem.

The tyre failure on Verstappen’s car wasn’t dramatic only because of the championship’s hopes, but more importantly because on the team radio with FIA, Red Bull declared they “got zero warning of that failure. Nothing. No vibration.”. Moreover, the similarity with Lance Stroll’s accident led many to consider Pirelli somehow guilty of the failures.

Championship leader Max Verstappen, visibly angry while talking with TV crews, said “I didn’t feel anything up until the moment that I suddenly went to the right, the tyre just blew off the rim and it’s not a nice impact to have, it’s quite a dangerous place to have a tyre blowout at that speed. For sure [there will be talks with Pirelli] but we know the result from that conversation already and that’s a bit hard to accept. It will be related to debris, it’s like that. I’m sure there will be talks, Pirelli isn’t happy with what happened here today, but it doesn’t change anything about the race and the result I got here. Of course, I’m pissed off because of what happened today. It was a fairly easy race for me. Sometimes this sport is very harsh when things like this happen, it’s s*it.”

The Dutchman then, declared he personally doesn’t think tyre wear caused the crash as “I wasn’t stressing the tyres. It felt comfortable and I didn’t feel any vibrations before it let go.”. However, he is also not convinced of the hypothesis of debris causing him a puncture: “[Debris] is difficult. We’re doing the same line every lap because everyone wants to be in the slipstream. It’s very weird that it happens to me. I think they cleaned the track [after the Stroll crash] but Pirelli is probably going to say it was carbon debris on track. It was like that in Imola, so that’s something you can’t say anything about. The fact is another tyre exploded, not only for me but also for Stroll. It’s very frustrating, with a bit of luck we’re still in the lead of the championship but the gap could have been much bigger and that was much more important.”

Agreeing with Verstappen, Pirelli Formula 1 boss Mario Isola told Motorsport.com he refutes the possibility of tyre wear causing the crashes as “It was on the rear left tyre, that is not the most stressed here, because it’s the rear right. And the other point if we talk about wear, the most worn tyre is the front right. So it is not a matter of wear. “. The debris hypothesis seems the most probable for Isola: “I believe it was debris, because they didn’t have any warning that there was something strange on the car, on the suspension, on the tyre, on the brake, nothing was giving any sign of failure. And it was a sudden failure. So considering the rear left is not the most stressed tyre, the cut we found on Lewis’s tyre and so on, these are indications that are taking us in that direction.”.

However, the Italian manufacturer specified the accidents shouldn’t have happened and further investigations will be conducted in Milan.