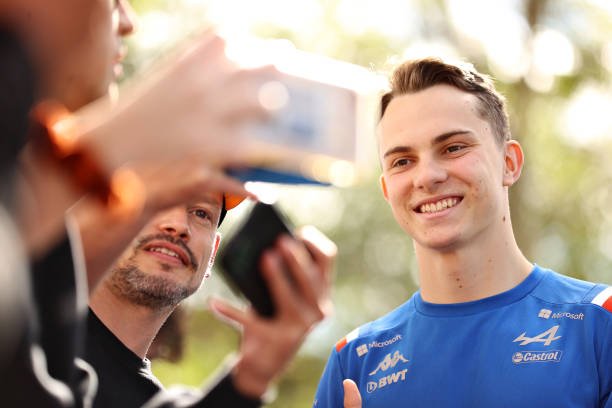 MELBOURNE, AUSTRALIA - APRIL 07: Oscar Piastri of Australia, Reserve Driver for Alpine F1, arrives at the circuit and poses for a photo with fans during previews ahead of the F1 Grand Prix of Australia at Melbourne Grand Prix Circuit on April 07, 2022 in Melbourne, Australia. (Photo by Robert Cianflone/Getty Images)

Oscar Piastri won the FIA Formula 2 Championship in 2021. It was the Australian’s rookie season and he won with 252.5.

The natural progression after winning Formula 2 is to move up into Formula 1. However, for Piastri that unfortunately did not happen. Fellow F2 driver Zhou Guanyu was given the Alfa Romeo seat for 2022. This was the only available seat after Alex Albon was confirmed for Williams.

Whilst Piastri is not racing in F1, he is part of an F1 team. After Esteban Ocon and Fernando Alonso were confirmed as the drivers for Alpine, Piastri was given the role of their test and reserve driver.

Whilst he will not be racing this season, it is not a wasted opportunity. Alpine’s CEO Laurent Rossi is assured that 2022 will be a year of development for Piastri.

What does the role include?

As reported by Autosport, Rossi revealed that the role Piastri now has is being redesigned around him. He said that Piastri’s role includes “extensive testing” involving “a lot of test days, a lot of kilometres, a lot of simulator.”

The team feel that Piastri can bring more on the simulator than those who are perhaps “less seasoned”. It is a benefit for the team but for Piastri as well.

Rossi noted that Piastri has more of an advanced role than other drivers as the team “are including him a bit more in depth” when in comes to being “in the briefing room of the data analysis”.

This role allows the Aussie to get “a lot more information, a lot of experience and expertise.” Piastri won three consecutive titles in Formula Renault, F3 and F2. These help him give Alpine “better input” and “better feedback” that they can “rely on”.

Not only is he looking at the data, he is looking at the cars themselves. Rossi said that Piastri is “providing potential feedback on the way cars behave”.

He noted that this programme is “much more intense than a rookie or reserve driver programme will [usually] get.” He confirmed that:

“Oscar is doing it all.”

Will we see him driving this season?

According to Rossi, we could see Piastri on the F1 grid this year. There are potential plans in place to see the reserve driver take part in free practice sessions.

Rossi said that the team have “a couple of grands prix that are earmarked as possible.” He added that those tracks will be ones where “drivers are very comfortable”. Having Piastri take part in a practice session where “FP1 is not that important … could be an option”.

The team “loved the idea” of having Piastri take part last weekend at his “home race”. However, it was not a viable option.

Rossi clarified saying that “those cars are brand new” and “are still rather fragile for all teams”. In Melbourne there was the new layout so “the track is new” and Alpine “don’t have a lot of spare parts.”

Because of those “parameters”, the team “decided it will be later in the season” when we see Piastri on track.

Bruno Michel, the CEO of Formula 3 and Formula 2, shared his thoughts on Piastri when speaking to FormulaNerds.

Michel expressed that everyone would love to see Piastri racing. He said that “Oscar is a great driver, absolutely zero doubt about that”.

The CEO continued and said he is “completely confident” that the young driver “will get his time” in Formula 1. Michel also shared his confidence in Alpine, saying he “knows Alpine are doing the right thing” to help prepare the current F2 champion.