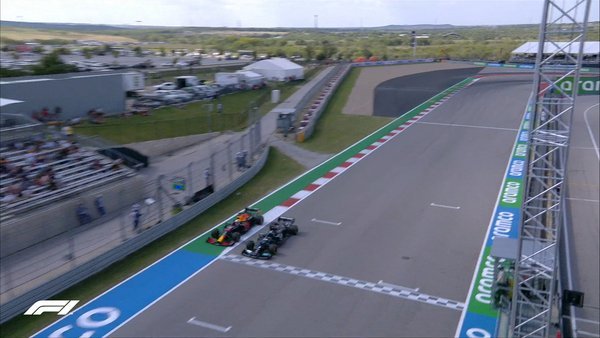 Perez surprises as tensions boil in US second practice

Perez was 0.257 seconds ahead of McLaren’s Lando Norris with the Mercedes duo of Lewis Hamilton and Valtteri Bottas following shortly behind.

Hamilton did set the quickest time of the session, but his lap time was deleted for exceeding track limits.

The Mercedes driver came close to Red Bull’s Max Verstappen early in the session, the two title rivals duelling over track position along the pit straight, frustrating the Dutchman who abandoned his short runs to focus on race simulations and leaving him eighth on the timing sheets.

Norris’ teammate Daniel Ricciardo had a much better afternoon in Texas following a tough first practice, improving up to fifth albeit on the soft tyre, while those ahead used the mediums other than Norris.

The focus quickly switched to long-run pace for the teams as they try to understand how the tyres will perform on an unusually hot surface in Austin.

Lock-ups were a common theme throughout and degradation could be a key issue for the drivers to manage on race day.

Fernando Alonso – who missed a large portion of the morning session – found his afternoon ending prematurely after skidding out at Turn 19 and clipping the barrier, slightly damaging his Alpine.

Lance Stroll was an impressive sixth for Aston Martin, ahead of Ferrari’s Charles Leclerc.

Verstappen, the other Ferrari of Carlos Sainz and Antonio Giovinazzi’s Alfa Romeo completed the top 10.

Verstappen had a difficult afternoon session in Texas.

The Dutchman often found himself impeded by traffic when he tried to set flying laps.

One of the culprits of blocking Verstappen was none other than Hamilton as the two squabbled over track position on the pit straight and provided an insight into what Sunday could look like.

No love was lost between the pair with the Red Bull driver making a gesture towards his rival after he conceded position.

Verstappen switched his focus to long-run pace earlier than the rest of the field, such was his frustration.

Traffic was a prominent issue throughout and could be a problem for the drivers during qualifying – Nikita Mazepin’s Haas was perilously close to an Aston Martin leaving the pits midway through the session.

The other Red Bull of Perez had a much better session than his teammate.

The Mexican, who also struggled in the morning session, was much improved and topped the leaderboard.

Hamilton had set the quickest lap of the session but was one of many drivers to have his laptime deleted for violating track limits at Turn 19.

Perez was 0.364 secs ahead of the Mercedes driver and 0.414 secs clear of Bottas, who will take a five-place grid penalty after qualifying.