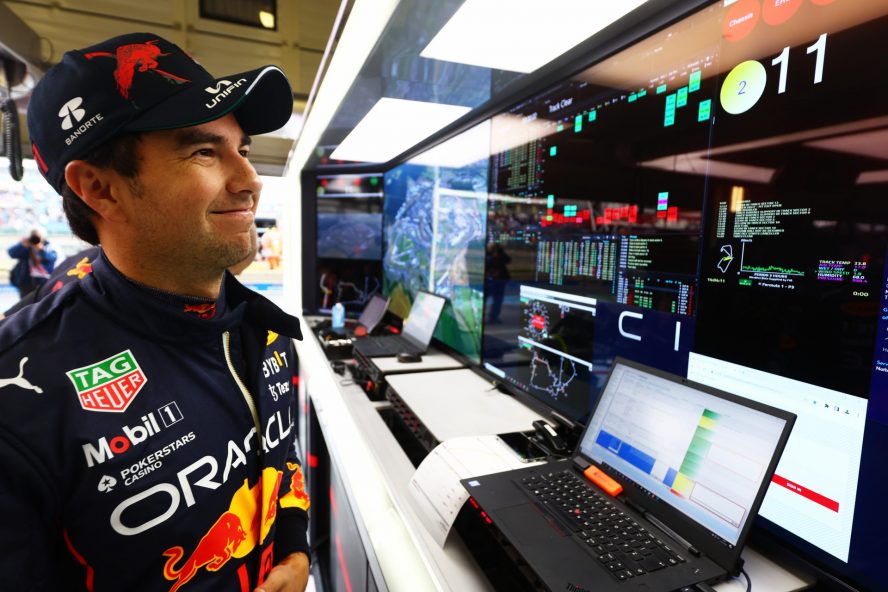 Red Bull were noticeably missing from the top of the timesheets on Friday.

Sergio Perez has said Red Bull has work to do to challenge for victory at Silverstone this weekend. The team finished Friday with a best result of P4 in practice.

Max Verstappen and Sergio Perez finished the first practice session well down the order. Like the rest of the grid, the Bulls were impacted by typical bad British weather, opting for minimal running.

Practice 2 saw the Milton Keynes-based team look to make up for lost time. However,  both drivers struggled for pace, with reigning World Champion Max Verstappen the highest placed Red Bull in P4. Verstappen was 0.207s slower than leader Carlos Sainz in the Ferrari. Teammate Sergio Perez finished in P7, 0.811s behind Sainz.

Perez admitted to Formula1.com after FP2 that ” the car is miles off ” the simulator data, and the team is “bit on the back foot”. The Mexican believes however that the team can salvage the situation, and recover ahead of qualifying:

“It wasn’t a great session today. I think from our preparation that we had and simulator, the car is miles off – so we assume that there’s something going on that we need to understand. And yes, it was a very, very short long run there at the end. So yes, not a great start. We are a bit on the back foot, so we just have to understand what’s going on with it.

“It’s going to be pretty difficult [to recover] but we’ve done it before and I think as long as we are able to get things in the right place, you need the confidence around these fast corners, so as long as I’m able to get back my confidence, I think things should be alright.”

Perez also is confident he knows where to recover the performance deficit:  “We do have, I think, there are some [suspicions] on the aerodynamic side but yes, obviously, we cannot go too much into detail.”

Teammate Verstappen believes the team’s limited running in FP1 contributed to a challenging FP2 but admitted the team, has “a lot to work on” overnight:

“Yes, I mean it’s always a bit tricky after not driving in FP1 for everyone, and then FP2 becomes of course a lot more of a bit of guessing, let’s say it like that, where normally in FP1 you just build it up.

By Grace Robinson5 hours ago

“It was maybe not ideal but also not a big issue, so I think we know what we have to work on and that’s what we’ll try to do overnight, but again tomorrow probably it’s raining so we have again different type of conditions. But it was okay.

“[We did a] few laps with the softest compound, which I think is alright. It’s just around here with all the high-speed corners, the tyres in general, they wear a lot. It was always going to be, I think, quite tricky to manage the tyres.”

The Dutchman was not overly concerned by Ferrari’s pace at Silverstone stating that the Scuderia’s pace was not surprising. Believing Red Bull are “still in there”,  Verstappen is confident Red Bull will turn things around overnight:

“Every weekend they are fast, so it’s not a surprise… [But] it was not bad, we’re still in there, there’s still a few things we need to look at, tyres as well – so it’s alright!”