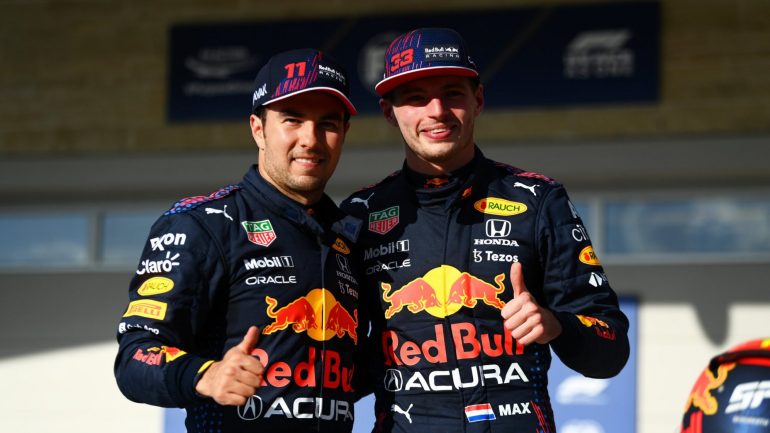 Sergio Perez has had a mixed first year at Red Bull.

The Mexican driver won in Baku back in June and has picked up three podiums since then, but he’s also had some very difficult weekends and is currently fourth in the drivers’ standings – just one point ahead of McLaren’s Lando Norris.

Despite two horrendous weekends at both Imola and Silverstone, Perez is fairing better than predecessors Pierre Gasly and Alexander Albon – and now it looks like he’s finally where Red Bull need him.

In Turkey, Perez was excellent during Sunday’s race. The former Racing Point driver managed to work his way into a podium position after qualifying seventh.

Crucially in Istanbul, however, was Perez’s robust defence against teammate Max Verstappen’s title rival Lewis Hamilton, keeping the charging Mercedes driver at bay as he looked to mitigate the damage caused by an engine penalty.

Hamilton would finish the race fifth, handing the fluctuating championship lead back to Verstappen.

Two weeks later in Austin and Perez arguably showed his best qualifying performance of the year, starting the race from third but looking like a real threat to pole throughout practice.

Perez has shown during his many years in the midfield that his skillset is certainly more applicable to Sundays rather than Saturdays, but his qualifying performance in Texas was only the third time he has started in the top three all season, having a lower qualifying average than Norris and Ferrari’s Charles Leclerc.

Yet on Sunday, Red Bull reaped the rewards of having their second driver in the mix.

Too many times this season have Mercedes had the strategical upper hand by having both Hamilton and Valtteri Bottas in the fight against a lone Verstappen – and at times it’s cost Red Bull victories.

But in Austin, Perez being in third had a benefit but in a different way.

Bottas had yet another engine penalty, removing the Finn from the equation and usually allowing for easy feeding for the McLaren and Ferrari drivers.

After being jumped at the start by Hamilton in the United States, polesitter Verstappen found himself off the track at Turn One and made a poor exit, putting him under threat from the driver behind, but thankfully for him, it was Perez who backed off to allow the championship leader to maintain second – any other driver and the Dutchman is third and potentially loses the race.

It’s hard to imagine if the likes of Norris or Leclerc managed to muscle their way past Verstappen at Turn Two if the Red Bull driver would’ve been in the position to undercut Hamilton to retake the lead.

With modern Formula 1 cars being notoriously difficult to overtake in, it’s hard to imagine Hamilton not creating a large enough gap to Verstappen to protect himself from the undercut – especially as the Mercedes and the Red Bull showed similar pace on the hard tyres.

But by Perez being there, it gave his teammate the platform to overcome a difficult start to the race and gave his team the advantage strategically in order to take the race from Hamilton and Mercedes.

During the first stint, Perez was also able to keep himself within the pitstop window of the top two, preventing Hamilton from defending against an inevitable undercut and leaving the ball firmly in Red Bull’s court.

In the latter stages, Perez was eventually dropped by the leaders and finished 42 seconds behind race winner Verstappen.

But his input during the early stages ensured that Red Bull was able to take what was a somewhat upset victory at a circuit that has seen Mercedes dominate in recent years, and allowed the other Red Bull driver to extend his championship lead up to 12 points – the biggest gap since Austria.

If Perez can keep this up in the remaining five rounds of the season – then it’s certainly advantage Verstappen in this titanic championship battle.