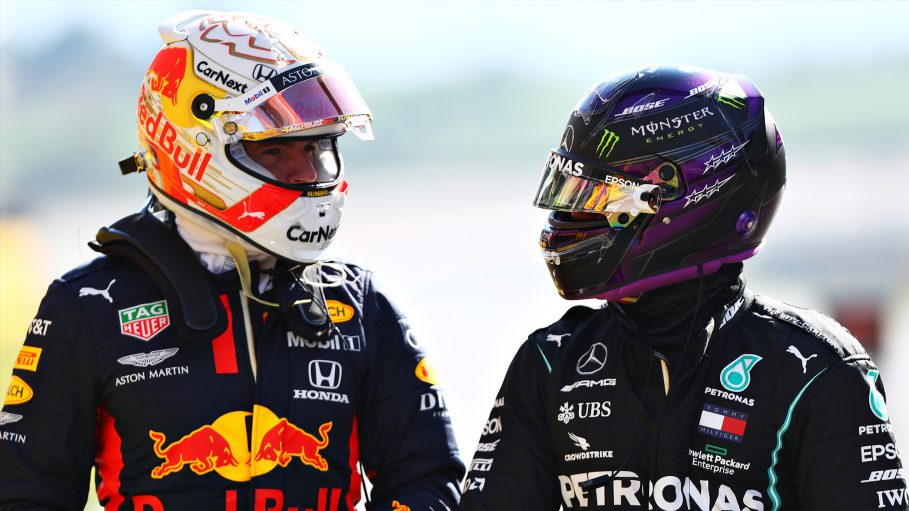 Palmer:”This is the title battle of his career”

After a thrilling season opener in Bahrain in which Hamilton took the victory, it was Verstappen that took the top step at Imola, and the pair are now separated by one point in the championship standings after Hamilton claimed fastest lap in Italy.

Verstappen made a bold overtake on Hamilton at Bahrain, but was forced to give the place back due to overtaking off of the circuit, and the pair battled at the start at the Emilia Romagna Grand Prix, with Hamilton losing his front wing end plate in the tussle.

The seven time world champion also made an error at Imola, spinning off the circuit and just missing the barriers. He was able to reverse back onto the track, emerging in ninth, but pulled out a brilliant comeback drive to finish 22 seconds behind winner Verstappen. It is still early in the season, with two races down and 21 to go, but Palmer expects more close battles between these two, and believes a rivalry will develop which could be similar to that of Hamilton on his former Mercedes team mate Nico Rosberg. Both drivers have the same goal, to win a world title. It would be Verstappen’s first, and Hamilton’s eighth which would see him break Micheal Schumacher’s record.

“This race [Imola] if anything has absolutely shown us who will be fighting for the championship this year, and when you’re fighting with your rival you can take more risks because if you get it wrong you’re probably going to take both out,” said Palmer speaking on the BBC’s Chequered Flag podcast.

“If you’re fighting your championship rival you can get your elbows out a bit more, be more argy-bargy. It showed the aggression I’m looking forward to seeing over the next 21 races. I think Lewis knows this is the title battle of his career. He had them in 2007 and 2008…but okay, the title battle of the decade. He’s not had a challenger as good as Verstappen, maybe since Fernando Alonso in the same team, but that was when he was a rookie. This is a challenger more fierce than Felipe Massa ever was in 2008,”

“We harp back to the Rosberg days but they would rather crash with each other than finish behind each other. It’s the same now,” he added. “That’s the fierce rivalry that’s already been born for this season. Hamilton took a risk at the start of the race because he would rather neither of them finished the race, probably, than finish second behind Verstappen. That was the thing with Rosberg and Hamilton – better to take chances in 50-50 moments and put your car in the position where you might have a crash if he turns in,”

“You might risk a bit of contact here or there. When it’s your rival, you’ve got to do it and I think we’re going to see a crash between them at some point and I don’t know how we didn’t at Imola.”