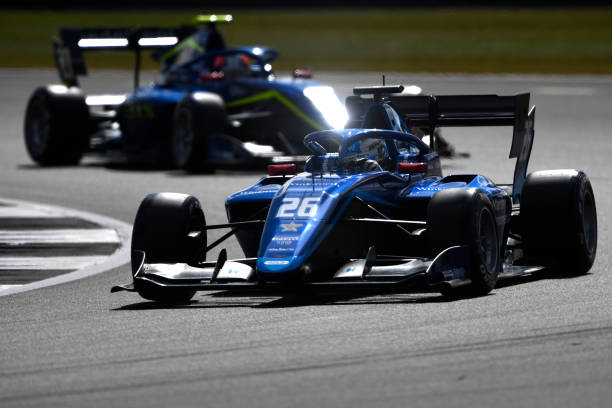 NORTHAMPTON, ENGLAND - JULY 01: Zak O'Sullivan of Great Britain and Carlin (26) drives on track during practice ahead of Round 4:Silverstone of the Formula 3 Championship at Silverstone on July 01, 2022 in Northampton, England. (Photo by Rudy Carezzevoli - Formula 1/Formula Motorsport Limited via Getty Images)

British driver Zak O’Sullivan claimed his first-ever pole position in Formula 3 at Silverstone this weekend. The Carlin driver was fastest ahead of Prema’s Arthur Leclerc and Trident’s Zane Maloney.

MP Motorsport’s Caio Collet was the first driver to set a fast lap, putting the benchmark at 1:45.6. His teammate Kush Maini stole that spot from him moments later.

Oliver Bearman then set a 1:45.107, which held him at the top of the timing sheets for the next couple of minutes.

With ten minutes gone in the session, Maini set another fastest lap, before getting topped by Bearman yet again. However, Bearman’s lap time was deleted not long after due to a track limits violation. So provisional pole went back to Maini, and Bearman dropped to second place.

As a few drivers had issues with oversteer, Isack Hadjar was the closest to losing the car. The Hitech rookie very nearly had an accident after a wiggle going into a corner, but he saved it and the session continued without incident.

About halfway through the session everyone came back into the pits to regroup. At that point, the top five were Maini, Bearman, Maloney, Jonny Edgar, and Leclerc.

the battle for pole

With about ten minutes remaining everyone rushed to get back onto the track to set their final laps. The championship leader, Victor Martins, was among those desperate to improve. Sitting a lowly 13th, he set two purple sectors, but was only fast enough to go second behind Collet, who set a 1:44.823 just ahead of him.

But then it was O’Sullivan who jumped to the top with a surprising 1:44.597 with five minutes to go on the clock.

With time quickly running out, drivers were vying for pole, but no one could come close enough to topple O’Sullivan from his spot.

In the end, he claimed his first pole position at his home race ahead of Leclerc and Maloney. Collet and Jak Crawford completed the top five.