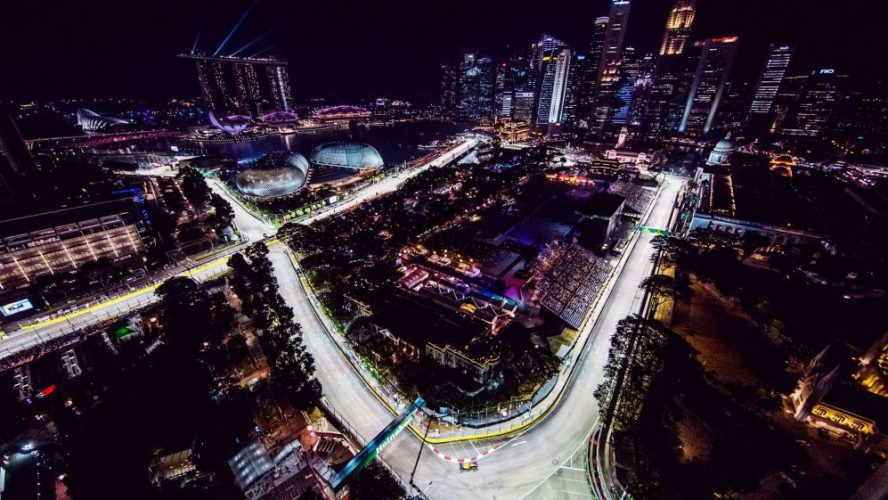 Earlier in the season, the so-called ‘porpoising’ phenomenon caused by the ground effect regulations used to build F1’s 2022 challengers, was a common (if not equally-disruptive) problem seen up and down the grid.

Since the FIA introduced porpoising changes and teams have managed to dial their cars in, this bouncing has become less frequent.

However, speaking ahead of the first Singapore Grand Prix in three years, Ocon predicted that drivers could be in for an uncomfortable weekend.

“It’s going to be very bumpy,” Ocon told RacingNews365.com. “A big challenge I think for us, very physical. I love Singapore. But the track itself is not my favourite. They [the cars] are go-karts on kerbs, it’s going to be a tricky one.

When asked if Singapore is the bumpiest on the calendar, he said: “I think Canada has been pretty bad. But probably it will be one of the worst ones. It always is, it’s not news.”

Heading into the Belgian Grand Prix, Mercedes had hoped that a new technical directive directed towards outlawing the flexi-floors said to be benefiting Ferrari and Red Bull, would give them advantage.

Yet, in the three races since, the German outfit has failed to close their pace gap to Red Bull or Ferrari, with Max Verstappen remaining a cut above the rest of the field.

In the run-up to Singapore, a circuit with similar characteristics to other temporary tracks like Montreal and Baku, one of its drivers George Russell said he’s not sure whether the race will suit the W13 or not.

“I think, on paper, Singapore should suit our car,” said Russell. “But when we look back at the street circuits of Monaco and Azerbaijan, our car doesn’t fare too well over the bumps.

“So, we’re not too sure how it will fall out. But we need to keep on pushing, keep on improving the car and I’m pleased that we’ve got a clear direction we need to go now.”

Agreeing with Russell, Mercedes’ Technical Director Mike Elliott believes the silver arrows could be in for a strong showing in Singapore, but only if they can optimise their car’s setup.

“I think when you look back at the learning we have gathered over the season, we expect that Singapore will be a bit more like we’ve seen in Budapest and Zandvoort,” he said.

“It’s a bumpy circuit which is going to provide its challenges, but in terms of the nature of the corners we think it could be a bit better for our car. So, hopefully we will have a good result there.”

What else can we expect in Singapore?

With Max Verstappen having won the last five consecutive Grand Prix, it’s likely that the Dutchman will be near the front of the pecking order throughout the weekend, but what else can we expect?

Alex Albon, who missed Monza due to appendicitis, still hopes to make his comeback in Singapore, despite admitting that “it’s one of the toughest races” that F1 drivers go to, “so not an easy one” to stage a return at.

Elsewhere on the grid, Daniel Ricciardo, who has been dropped by McLaren for 2023, says he also expects the Woking outfit to struggle due to “fundamentally tricky” issues with its car.

“I made a comment during the race [at Monza] that the chicane, the low speed, felt like the problems that we had in Spa – the last chicane,” Ricciardo told GPFans.

“So yeah, [with that in mind] we still struggle a lot there [in Singapore]. “I think we understand why [we have the issue] but I’m not sure we have a quick fix. We’ll try.”

So, with the silver and papaya-coloured cars still apparently struggling, is there any hope of anyone challenging Red Bull this season? Yes, according to 1996 world champion Damon Hill, who says the outfit must keep developing or risk being caught.

“If you stand still, for a second in Formula 1, in this sport you are going to be swamped,” Hill explained on the F1 Nation podcast.

“You are literally going to sink into quicksand. So the pace for anyone, even if they are winning, the pressure is relentless.

“If they don’t do any more development now on this car, I think Ferrari and Mercedes will be all over them by the time you get to Abu Dhabi.”