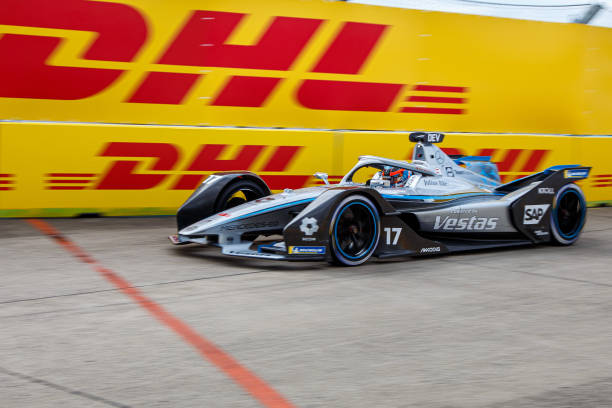 While the track layout was reversed following Round 7’s Race yesterday, Round 8 saw the same pole-sitter once again being Edoardo Mortara.

The grid however received a shake up with Nick Cassidy starting from the pit lane after a power unit change resulted in a 80 place grid drop.

Mercedes Nyck de Vries took the lead from the get-go making an impressive move up the inside of Edoardo Mortara who was on the defensive from Robin Frijns.

The battles in the midfield continued as Championship contender Jean-Eric Vergne fell down the order being overtaken by both Mitch Evans and Oliver Rowland.

Race leader De Vries was the first of the front runners to gamble with attack mode losing out on two places to Mortara and Frijns. However, these places were swiftly gained back for De Vries to take the lead once again.

Da Costa who activated attack mode with half an hour to go made great progress up into second. Mortara is next to take attack mode losing two places to both Lotterer and Vandoorne.

With the battle at the front of the field Championship leader Vandoorne manages to make his way past Lotterer to put himself into P3. This was short lived however as Mortara used his attack mode to breeze past the Mercedes-EQ of Vandoorne.

Mortara then used the remains of his attack mode to pass Da Costa and put himself in P2.

With 15 minutes remaining the top 10 remained similar while De Vries pulled away at the front of the field.

Slightly behind an intense battle for 5th was occurring. Da Costa overtook Rowland for fifth however Frijns behind sneaked in claiming sixth. This pushed Rowland down to seventh. Frijns wasn’t finished there as he passed Da Costa on the final lap to take P5.

De Vries crossed the line a comfortable 2.5 seconds in front of Mortara. Vandoorne managed to hold on to third putting both Mercedes-EQs on the podium as well as maintaining his Championship lead. Mortara after an incredible weekend now sits second in the Driver Standings pushing Vergne down to third.

Formula E returns on the 4th June for Round 9 in Jakarta.