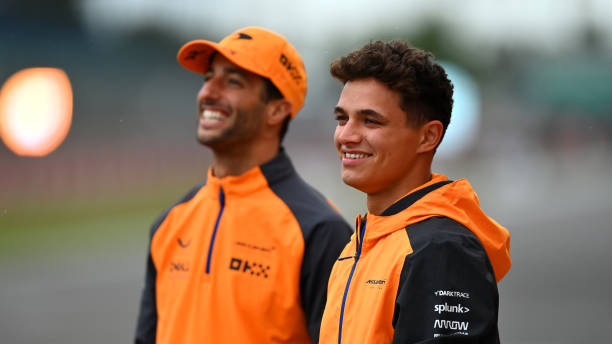 NORTHAMPTON, ENGLAND - JUNE 30: Daniel Ricciardo of Australia and McLaren and Lando Norris of Great Britain and McLaren look on during previews ahead of the F1 Grand Prix of Great Britain at Silverstone on June 30, 2022 in Northampton, England. (Photo by Dan Mullan - Formula 1/Formula 1 via Getty Images)

Norris reveals why Ricciardo is struggling

Daniel Ricciardo has struggled to get to grips in the MCL36 and his teammate has suggested the reasons for the Aussie’s struggles.

Last week, Daniel Ricciardo confirmed that he would be staying with McLaren for next season in 2023. The announcement came after McLaren Racing signed Alex Palou, which only increased the speculation surrounding Ricciardo’s future.

The Australian joined McLaren for the 2021 season after leaving Renault. Last year, it was evident that it took time for Ricciardo to get to grips with the car. However, in Monza, his fortunes changed and McLaren achieved a 1-2 finish with Ricciardo scoring his first win for the team.

Unfortunately, this season, his struggles have continued.

At the beginning of the season, during pre-season testing, Ricciardo contracted Covid-19. As a result, he spent less time in the car before the first race. With many drivers having caught Covid since the pandemic, it is evident that it can affect them long-term, much like Lewis Hamilton.

The first race of the season saw Ricciardo qualify P18, meaning he was out in Q1. He moved up a further four positions in the Grand Prix to finish 14th.

Luck hasn’t always been on his side as he suffered a DNF in Saudi Arabia and compared to Norris, has lacked race pace and the speed to out-qualify his teammate.

Ricciardo has only out-qualified Norris twice this season in Spain and Canada. Whilst Norris has achieved a podium, Ricciardo’s highest race result is sixth at his home race in Australia. He replicated this result in the Sprint Race of the Emilia Romagna Grand Prix.

After just 11 rounds of the season, Norris is seventh in the Driver Standings on 64 points. Ricciardo is 12th on only 17 points.

With the difference in performance, questions were raised about Ricciardo’s future with the team. However, Norris has given an insight into what he thinks could be causing Ricciardo’s struggles.

With 2022 introducing the new cars and regulations, Norris believes this to be hindering Riccardo’s performance. He said that for the McLaren F1 cars, there are “unique” characteristics that can be rather problematic. This is especially if you struggle to adapt your driving style to suit the car.

Norris told Formula1.com that he “struggled at the beginning of the season” as well. In fact, he struggled “a bit more than what Daniel struggled with initially in the first few tests.”

By Samuel Coop16 hours ago

The young Brit continued saying that he does not mind “much instability from the car”. He said that allows him to “push on the fronts more.”

Norris acknowledged that the McLaren is different to other F1 cars, even mentioning that Carlos Sainz had said “they’re quite specific and unique” cars. He elaborated saying that “some of the driving styles you need are like not ones you grow up learning.” That can be difficult for a driver to “adapt quite a bit”, which could be playing a part in Ricciardo’s struggles.

When commenting on the 2022 car, Norris said that “especially this year, the car’s very different.” He noted that “some of the characteristics of last year are gone and we’ve introduced some other characteristics.”

Norris admitted he had to “adapt to” the McLaren this year and “change [his] driving style”. So, this could be a big part of Ricciardo’s struggles.

With warnings of track limits and the persistent difficulties of the MCL36 coming into play, could we see McLaren replicate or improve their 2021 result?