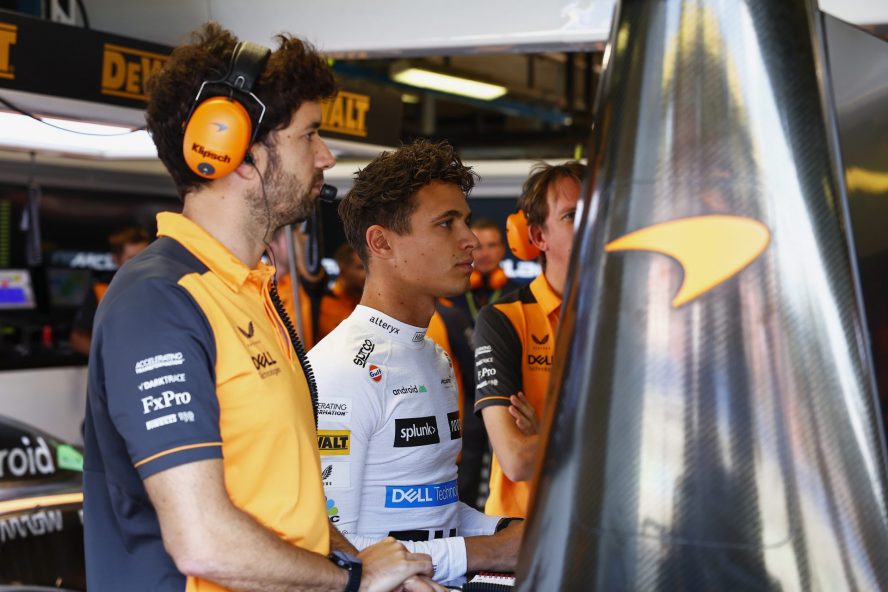 Lando Norris, McLaren, in the garage with engineers

McLaren driver Lando Norris believes the team’s final place in the Constructors’ Championship correctly reflects Woking’s season. In another difficult year due to the car’s underwhelming performance, McLaren managed to finish P5 behind Alpine, losing the “best of the rest” title.

Another difficult season for McLaren finished in Abu Dhabi. While the team had shown in the past an impressive positive momentum, 2022 saw Woking’s comeback come to a halt. On one side, Daniel Ricciardo’s struggles with the MCL36 continued while on the other side, the Renaissance of other teams such as Ferrari and Alpine left McLaren behind.

McLaren driver Lando Norris opened up on the season, admitting the final position in the Constructors’ Championship is an accurate reflection of the performance, as quoted by Autosport: “It’s where we deserve to be, P5,”

“I guess you feel very disappointed when there’s a shot at P4 and you feel like you could have had it. But we’ve had one bad weekend of reliability, Alpine have had four or five, they’ve had a quicker car the majority of the year.

“So, I think to have kept in a fight with them for so long, proves how good of a job we’ve done with a worse package, honestly. And therefore, that’s why I’m quite happy. We’re P5, but there are a lot of good things about the job that we’re doing.

“We’ve just started too far behind in the beginning of the season, so hopefully we can start much higher up next year, make the development, make the progress we did this season and we’ll be much better off.”

Norris: “The mechanics have done an outstanding job “

There is no doubt Lando Norris already assumed a leadership role within the team ever since 2021 and next year with the debut of rookie Oscar Piastri, the Brit will be even more at the centre of the team’s dynamics.

Norris, hence, didn’t forget to appreciate the team’s efforts: “Everyone here at the track I think has done a very good job, the mechanics, the engineers, I think we’ve pretty much maximised every opportunity we’ve had.

“The mechanics have done an outstanding job in the toughest year for pitstops. With heavier tyres, worse guns, we’ve had the fastest pitstop this year, we’ve had multiple fastest pitstops of weekends. So many areas are on a good trajectory and are better than ever.

“All the mechanics and engineers are more fired up than ever to make a better car. It’s just not an easy thing to do but they have a good plan in place.”