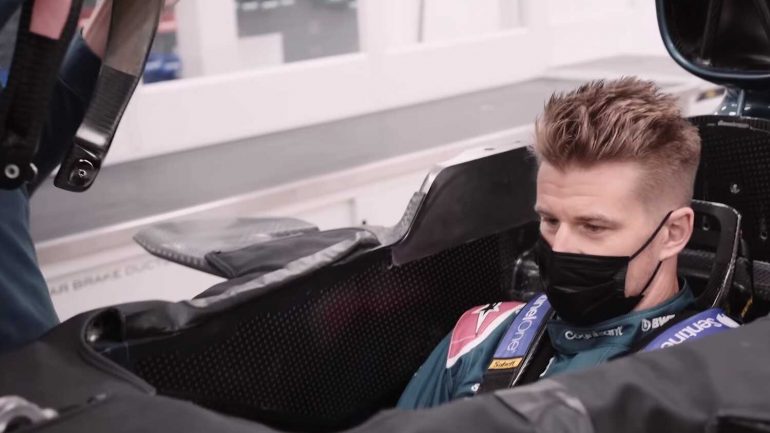 Nico Hulkenberg remains in Formula One as Aston Martin’s third driver and also as a pundit. In 2020, he came on twice for Racing Point to cover but he did not get the same opportunity last season.

As part of the behind-the-scene testing that teams perform, a lot of work is done on the simulator before going onto the track. Hulkenberg tested the new 2022 car which was constructed under the new regulations.

After giving it a try on the simulator, he shared what he gathered from his experience, saying, “One thing that immediately stands out is the cars look more futuristic and will have 18-inch rims instead of 13-inch ones in the future. By the way, these larger tyres make no difference to the drivers’ visibility. The driver will just see more rim instead of tyre wall like in the past.

“From my initial experience, the new cars are pretty damn fast and not necessarily slower than the last generation. The driving experience hasn’t changed that much either, at least in the simulator.”

These regulations aim at developing a more levelled field in Formula One, and one of the main concepts that were looked at was the ability for a car to keep up with the one in front of it, and maybe make overtaking possible too.

When giving this concept a try, Hulkenberg said, “It will be very interesting to see whether these cars can really follow the car in front better. In the simulator, the cornering speeds are extremely high, so the risk of ‘dirty air’ is still given.

“And it’s difficult for me to imagine that following another car comfortably at these speeds will be easy. Once pre-season testing starts drivers and teams will find out how the cars really behave on track.”

The German is excited to see how the regulations will affect the teams this season, and whether they will make a smaller team more competitive with others. He said, “I’m also looking forward to see which team and driver get off to the best start. This is where the wheat will be separated from the chaff, and it’s the guys who learn quickly, adapt quickly and adjust well to new conditions will be right at the front initially.

“Later in the year things can change because it will be a huge learning curve for everybody involved. It’s too early for predictions although I would be very surprised if the top teams from previous years will not be near the front.”

This view is similar to that of many others. Because it is still the first year with these regulations, all teams are still adjusting and it still leaves smaller teams with financial issues and a lack of resources, so it will take a season or two for us to see a lower team make its way to the top.