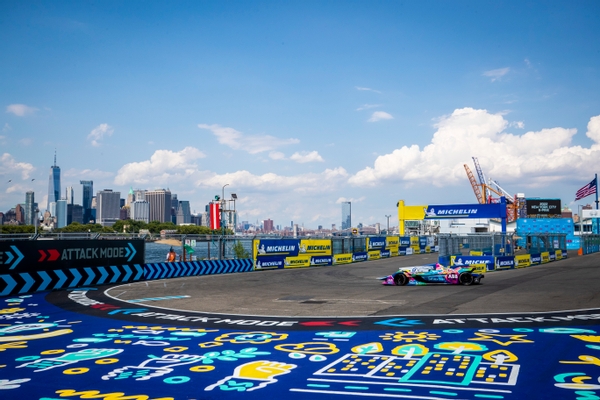 Nick Cassidy Takes Back To Back Pole Positions

Nick Cassidy takes pole position for round 12 in New York

Nick Cassidy claims back-to-back pole positions for round 12 around the streets of New York.

Championship leader Edoardo Mortara failed to set a lap time within the first six minutes after suffering issues with the car. As a result, he will start from the back of the grid for the E-Prix.

Sergio Sette Camara tops the timing sheet of Group A with a 1:09.566. He is closely followed by yesterday’s race winner Nick Cassidy, who took P2 with a 1:09.608. Nyck de Vries claimed P3 with a 1:09.670 while Alexander Sims took the final duel spot with a 1:09.692. Championship contenders Jean-Eric Vergne and Sam Bird both clipped the wall, leaving them unable to improve.

Lotterer and Sette Camara were the first to go head to head in the duels. Lotterer takes to the track first and despite a small lock-up early on sets a 1:08.685. This, however, was unable to be beaten by Sette Camara, who narrowly missed out with a 1:08.726.

Vandoorne and Cassidy were next to face each other. Vandoorne leads out onto the track; however, a few mistakes left him eliminated with a 1:08.765. Cassidy progresses onto the semi-finals after setting a 1:08.657

Sims and Evans were the last pair to go head-to-head. Sims takes to the track first, setting an incredible 1:08.796. This was unable to be beaten by championship contender Evans, who missed out by six-thousandths of a second with a 1:08.802 after clipping the wall.

Lotterer and Cassidy were the first to go head-to-head in the semi-finals. Cassidy sees himself through to the final once again after setting 1:08.795. Lotterer, see’s himself eliminated after setting a 1:10.420 following multiple mistakes.

Da Costa and Sims were the last pair to face off in the semi-finals. Sims took to the track first, setting an incredible 1:08.830. This, however, wasn’t enough to see him progress into the finals as Da Costa set a 1:08.681.

Yesterday’s pole sitter and race winner Cassidy faces Da Costa in the final qualifying duel. Cassidy took to the track first, claiming the fastest time of the day with a 1:08.584. This was unable to be beaten by Da Costa, who sees himself in P2 after setting a 1:08.751.