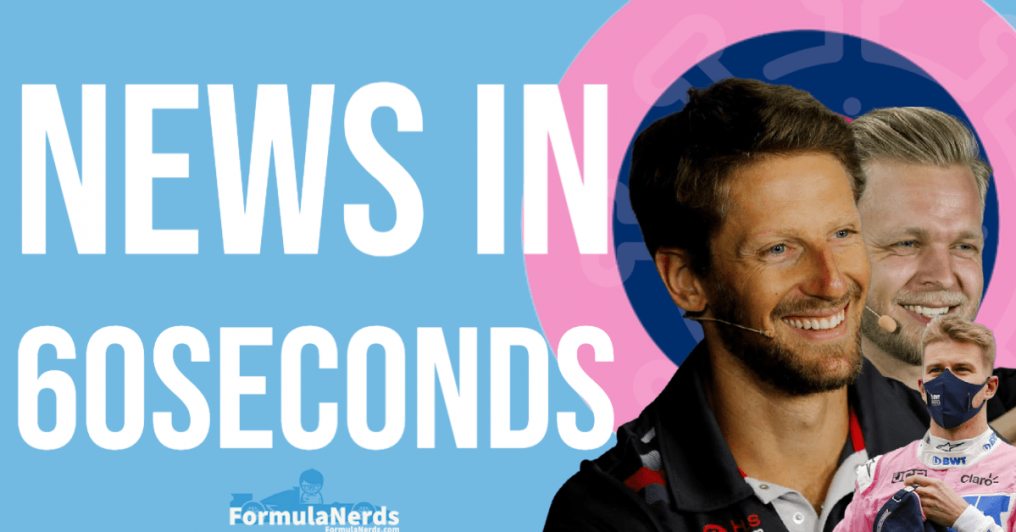 This week has been replete with driver lineup changes, covid scares, and an abundance of rumours. The news has been very fast-moving and until today not a lot has been solidified as leaks are often dismissed as educated guesses. Now that the smoke has cleared (a bit) we can share what we all know and make a few guesses of our own.

The biggest news to break this week was Haas’ confirmation to completely bin their current driver lineup.

Both Romain Grosjean and Kevin Magnussen will NOT be driving for the American team in the 2021 season. We had heard rumblings about this for a while and even confirmations that the team would confirm before the Heineken Grande Premio De Portugal at Portimao this weekend. The final word came on Thursday with the team releasing their official statement. Guenther Steiner, team principal, had this to say:“Romain was a fundamental part of our establishment as we sought to get a driver on board with both speed and experience. His results in early 2016 were a just reward, not only for his own talent but also for the sheer amount of effort the team had put in to be on the grid that season. When Kevin joined a season later, we saw an immediate return with both cars scoring points, and of course, our first double points finish in Monaco that year. We have a lot of good memories together – in particular, our 2018 season when we finished fifth in the standings in only our third season. Romain and Kevin played a significant part in that success. Of course, there is still plenty of racing left in the 2020 season. It’s been a challenging year, no doubt about that, but both drivers have given their all behind the wheel of the VF-20. We value their inputs and experience to keep pushing the team forward through to the Abu Dhabi Grand Prix in December.”Both drivers released statements conveying their gratitude to the team for sticking with them through the last few disappointing years. The team finished 5th overall in the constructor’s standings in 2018 only to fall to second-worst every year since (only Williams has finished lower). While we hate to see them both go, we are extremely excited about who will take their places. The current front runners for the two Haas seats are Callum Illot, Mick Schumacher, Robert Shwartzman, Nikita Mazepin, Sergio Perez, and a few others on a list of around 10 options that Haas is considering. There are many reasons why a younger driver pairing makes sense. Not only would an injection of new money help clear the ledgers, but it could revitalize the team as the 2021 regulation changes drop the entire sport into a level of higher parity and competition. The team is rumoured to be announcing who they will be this weekend although that is not confirmed at the time of writing. The change to the new car setup with new driver input could help them mould their development and research towards two drivers they would have greater longevity with. New cars and new drivers just make sense as they move forward especially if those drivers come with a bevvy of new sponsors. Other driver changes may not be as permanent. Reserve driver extraordinaire Nico Hulkenberg is on the ground with the Racing Point team again this week.

Meanwhile… Lance Stroll has had a negative Covid test, it is still unclear whether he will actually be cleared to race this weekend in Portugal.

Last time out at the Nürburgring, Nico was flown out and only took part in quali and the race itself. Even though only one free practice session was run, Racing Point are keen to ensure whoever is driving their second car gets the benefit of all the practice possible. In order to make this happen, Nico Hulkenberg has now been absorbed into the RacingPoint team bubble and travelled with them. Lance Stroll had tested negative before the runup to the Eifel Grand Prix. However, he fell ill in the early hours of Saturday and was not tested until Sunday evening once he had returned home. The standard protocol dictates a 14-day isolation period and a negative test. Stroll has had a negative test since but began his isolation on Sunday. We will be watching very closely to see if the FIA allow him to partake in all the sessions. Worst case scenario: he does. But this does give the Hulk the chance to rub elbows with some more F1 personnel and potentially work a deal while bolstering his race resume.