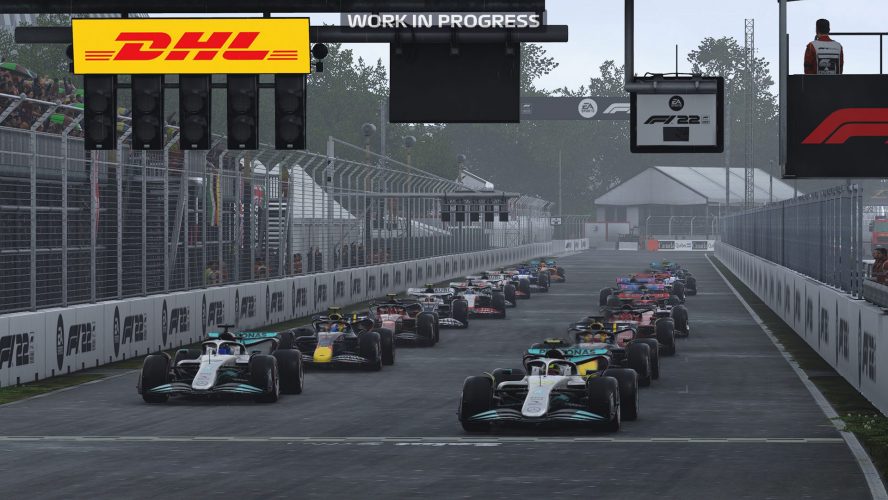 As the launch of F1 22 draws ever closer, EA and Codemasters have released new footage of VR in action. With VR making its F1 game debut on PC this year, the developer has teased gamers with a showcase video.

Ahead of the Canadian Grand Prix, fans have been treated to VR view of the Circuit Gilles Villeneuve.  Featuring Canadian Lance Stroll, gamers see the thrilling opening laps as the Aston Martin navigates through the field.

After successfully navigating the chaos at the start of the race, Stroll battles to maintain position, duelling with other cars. VR provides a more authentic, chaotic and free-flowing experience compared to other cockpit views.  The difference in the gaming experience for VR gamers is clear to see. In a statement, EA said:

Today, Codemasters® and Electronic Arts Inc. (NASDAQ: EA) released the first look at EA EA SPORTS F1® 22 gameplay captured in VR ahead of this weekend’s FORMULA 1 AWS GRAND PRIX DU CANADA 2022. Exclusive to the PC platform, VR is just one of the many innovations that await players when the game releases on July 1. Featuring local hero Lance Stroll in the Aston Martin AMR22, the immersive gameplay demonstrates the claustrophobic feel of sitting in the cockpit. Players will experience the thrill of racing in the pinnacle of motorsport like never before throughout the 4.361km Circuit Gilles-Villeneuve in Montreal. F1® 22 will also be available for PlayStation®5, Xbox Series X|S, PlayStation®4, and Xbox One.

Lee Mather, F1® Senior Creative Director at Codemasters said VR will get gamers “as close to Formula 1 racing as you can get”.

“VR revolutionises F1 22 on PC and takes the race weekend to an entirely new level,” From the claustrophobia of sitting in the cockpit to the intensity of lights out as 20 cars accelerate towards the first corner. This is as close to Formula 1 racing as you can get without being on the actual grid.”

VR will be available for F1®, F2™, and supercars as part of F1® Life. VR will let players experience the race weekend from a new perspective. Starting in the garage, watch the team work tirelessly before heading to the grid. Marvel at the intricate detail of the environment.  Feel the intensity and speed whilst fighting for the racing line in this season’s revolutionary new cars. This year’s cars come complete with new physics and handling models.