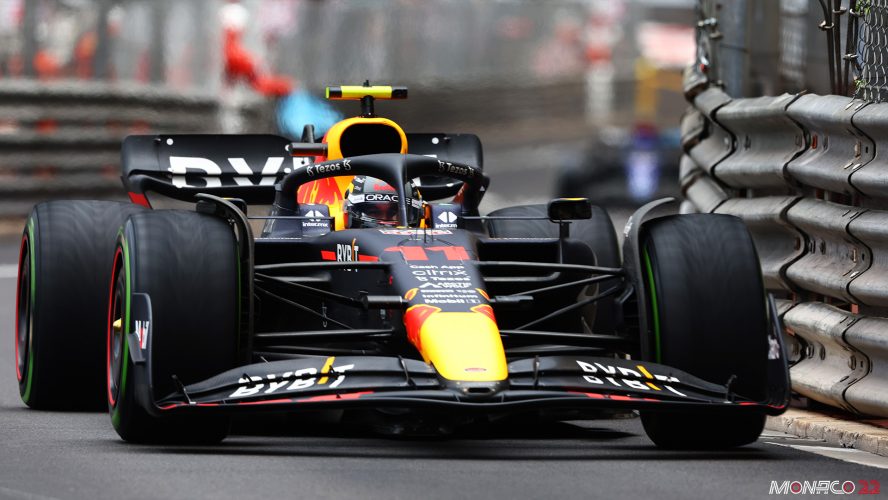 Sergio Perez Rises Above Ferrari in the Monaco Grand Prix

Sergio Perez triumphed in the first Monaco Grand Prix that he led, as the Ferrari mechanics mistakened the strategy.

Carlos Sainz was smart and went straight on to the dry tyres rather than having a two-stop to change to intermediates.

Meanwhile, Max Verstappen trailed in third while Charles Leclerc finished his first-ever Monaco Grand Prix in his racing career. It was a disappointing finish to a great weekend for the Monagesque and was also dominating the Grand Prix before the mishap with his team.

Monaco gave for an interesting Grand Prix logistically. Besides starting late because of the rain, it included a red flag which then turned it into a timed race. After racing for five laps since the safety car went in after the second start, a time of 35 minutes was put on.

Charles Leclerc built a good gap from the other cars but it was time to pit for the Monagesque. Max Verstappen pitted along with him and both drivers went on the Intermediates. Verstappen was faster than Leclerc and confusion happened in the Ferrari garage.

They told Sainz to finally pit and even Leclerc. The Monagesque’s mechanic was heard screaming at Leclerc to stay out but there was no time for him as he was already in the pit lane. The order at lap 23 was Sergio Perez, Carlos Sainz, Max Verstappen and Charles Leclerc.

Leclerc was furious with this decision as all four drivers were now on hard compound tyres. It was not over for the Ferraris though as they were still very close to the Red Bulls.

All teams went in for the red flag, and coming out both Red Bulls were put on the medium compound tyres while the Ferraris kept on the hard compound.

Sergio Perez led the Monaco Grand Prix for the first time ever for a good part of the race. Carlos Sainz started gaining on Perez as the hard compound tyre started doing its job and kicked in. During the last few minutes of the race, the Red Bulls were under high pressure by the Ferraris but they proved to be too strong.

The race start kept getting delayed due to the wet track conditions. The formation lap was first delayed to 15:09, and most drivers were about to start on the intermediate compound tyres. Then, it was moved to 15:16 as the rain started pouring down as teams prepared to the wet compound tyres for a formation lap behind the safety car.

This was done as a safety procedure since there was no running on a wet track throughout the whole weekend. The race got worse as they performed some formation laps and the session was red flagged.

Christian Horner agreed that it was too wet to race, while talking to Sky Sports. He admitted that Red Bull did need some rain or a safety car, “something of the unknown”, to try and go up some places. It looks like the team’s and director’s radars were blocked by one of the mountains in Monaco and that amount of rain could not be detected.

Despite the rain conditions, the drivers and teams were eager to get racing. They went out on track again at 16:05 behind the safety car.

All timings above are in Monaco local time.

Mick Schumacher crashed his car into the swimming pool chicane and caused a virtual safety car. The Haas was detached and luckily the German came out of the car unharmed. He spun as he was entering the chicane and the impact caused the car to detach itself between the rear wings and the rest of the car. The gearbox was also detached.

The proper safety car was later on deployed at lap 30.

The barrier was severely damaged and a red flag had to take place to fix it. The race continued at 17.15, Monaco local time from a rolling start behind the safety car. The lapped cars were allowed to overtake.

Esteban Ocon almost took the front of Lewis Hamilton. The issue was that Ocon was already in front of the seven-time World Champion, and the stewards could not really penalise the driver. The French managed to keep Hamilton behind him for a good amount of laps.

They were close to collide throughout the battle but Ocon kept going strong. Hamilton complained that the Alpine driver should have been investigated, but there wasn’t really a reason to.

By Grace Robinson3 days ago

A couple of flags and a red flag later, the stewards decided to take a look at it and decided to give Ocon a five-second penalty.

It was not over for Lewis Hamilton though, as he now had Fernando Alonso to hunt down.

Pierre Gasly Getting Ahead

The French’s early change to Intermediates played out in his favour. From the eighteenth, he started to make his way up as the drivers in front of him started pitting too. He then made a brilliant move on Alfa Romeo’s Zhou Guanyu to get in thirteenth.

He started hunting down Daniel Ricciardo in the McLaren, who at first made it difficult but eventually Gasly found a way to get up to twelfth.

The French recorded two fastest laps in the early stages of the race and started his way to hunt down Kevin Magnussen in the Haas too.

The Danish eventually retired and after the red flag, Gasly had four-time World Champion Sebastian Vettel ahead of him in the Aston Martin.

Behind the safety car

Nicholas Latifi and Lance Stroll both had to make their way into the pitlane at the beginning of the race. They both crashed into the barriers behind the safety car rolling start.

The drivers started changing tyres at the beginning of the race to the intermediate compound and as Latifi was going into his pitstop, Stroll was coming out. The Canadian drivers almost crashed into each other but luckily Stroll made a sudden break.

The intermediates still looked like they are not the ideal tyre for this race. Pierre Gasly’s timings were not looking good, as he was struggling to make it up some places from eighteenth. That was until he managed to get the fastest lap as he heated up his tyres some more and the track started getting drier.