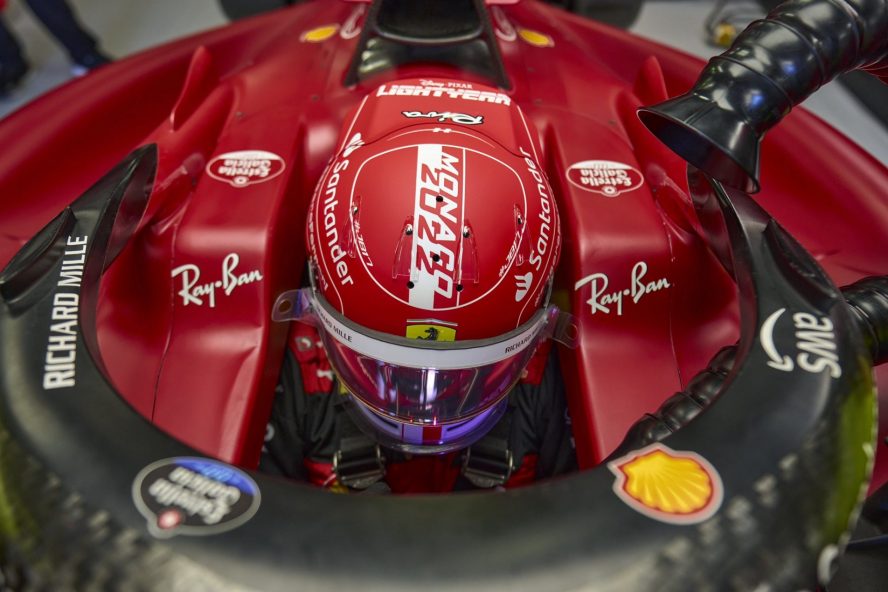 Christian Horner admitted that Red Bull were not as fast as the Italian side and hope to get better for tomorrow’s session with the data obtained.

This time round the Red Bulls went out on the medium-compound tyre while both Ferraris took on the hard.

Sergio Perez lost his left mirror during the session, which the garage was quick to fix. The four cars were exchanging the first few places on the table continuously. Both teams went on to test the soft-compound tyre, which no team put on during the first practice session.

With 13 minutes left, Charles Leclerc was seen coming out of his Ferrari. They parked the car earlier, and it’s thought that maybe they are saving some milage for the Saturday qualifying session.

Christian Horner said that while he’s intrigued about why Leclerc left the car, they are still focused on their team’s long runs and what they are doing. He admitted that Ferrari have shown a lot of speed in this session and that hopefully, Red Bull can keep up with them tomorrow. Max Verstappen struggled a bit in some parts of the sectors, while Sergio Perez looked more comfortable in the Red Bull.

Horner finished it off with the fact that they have “got plenty of data now” and they can prepare themselves for tomorrow.

The Monagesque did come out again for another run in his Ferrari as the track was getting colder towards the end of the second practice session.

Daniel Ricciardo caused a red flag as he crashed around the swimming pool section in the last sector. His front wing was completely damaged and the mechanics have a lot of work ahead for tomorrow’s sessions. Thankfully, Ricciardo was all good despite the crash. The 2017 Monaco Grand Prix winner had some understeer and lost the rear. The car suffered a strong hit against the ground which caused the front wing to come off before he crashed into the barriers.

Nicholas Latifi reported that there was still debris on the ground when the session continued. Despite that, the stewards still didn’t stop the session as there were many cars out on track at that point.

Meanwhile, it’s a mystery how Lando Norris is communicating with his team while out on track. He still cannot talk because of his tonsillitis which he came down with shortly after the Spanish Grand Prix. Despite the difficulty to talk, Norris is not feeling sick and has successfully completed both practice sessions on the Friday afternoon.

He even said that because during the Spanish Grand Prix he was feeling sick, it made him drive more relaxed. This helped in saving his tyres and it turned out pretty well for the Brit.

During the session, he was running in the top five places throughout. He only had two mishaps during the second session. With 23 minutes left on the clock, he hit the wall a bit at Turn one and had to box immediately. Later on, when only six minutes were left, he had a lock-up at the first corner and ran off track, just like what happened to many other drivers. The Brit managed to get out on track though.

Valtteri Bottas got to have a run out after he lost track time in the first session due to a gearbox issue. He had a better session than the first one, taking his time to adapt the car to the track before he starts any flying laps.

Unfortunately, he did not record a good lap which put him up in the timings. Alfa Romeo might be looking at making sure that their car is running smoothly before they start chasing pace and hot laps. This will help them to make sure that tomorrow, the car is performing well and get can a good position to start in during the qualifying session.

Zhou Guanyu was ready to get in his car but he seemed to stand by in the garage while the mechanics were still performing some work on it. Despite that, Zhou finally went on track and drove for at least 35 minutes of the session. The Friday session was the first time that the only rookie on the grid drove in Monaco in a Formula One car and can be satisfied with the data he gave his team.

News from other teams

Martin Brundle explained that Mercedes will have a lot of work to do on their suspension. Later on, Lewis Hamilton said that he had a “big flat spot in my front left.” With 23 minutes left on the clock, the Brit had a lock-up which forced him to run off the track, but nothing serious stopped his session.

Hamilton tested a new set-up with his ride-height while George Russell was running minimal changes on his Mercedes.

On the other hand, his teammate George Russell hit the wall at Turn 12, with the mechanics urging him to box to check for any damage.

Meanwhile, Yuki Tsunoda told his team on the radio that he had way too many vibrations in his AlphaTauri. He said that it was “really bad.” It was quite a frustrating session for the Japanese, as he was telling his team that he had no space.

Being a narrow street circuit, it’s for drivers to find themselves crammed with other cars. Tsunoda felt that he had no air to start recording some flying laps and data to analyse for the team.

As for Aston Martin, Sebastian Vettel merely missed the wall and avoided a lot of work for his mechanics ahead of the weekend. The other mishap they had was with Lance Stroll, who also ran off the track at Turn one.