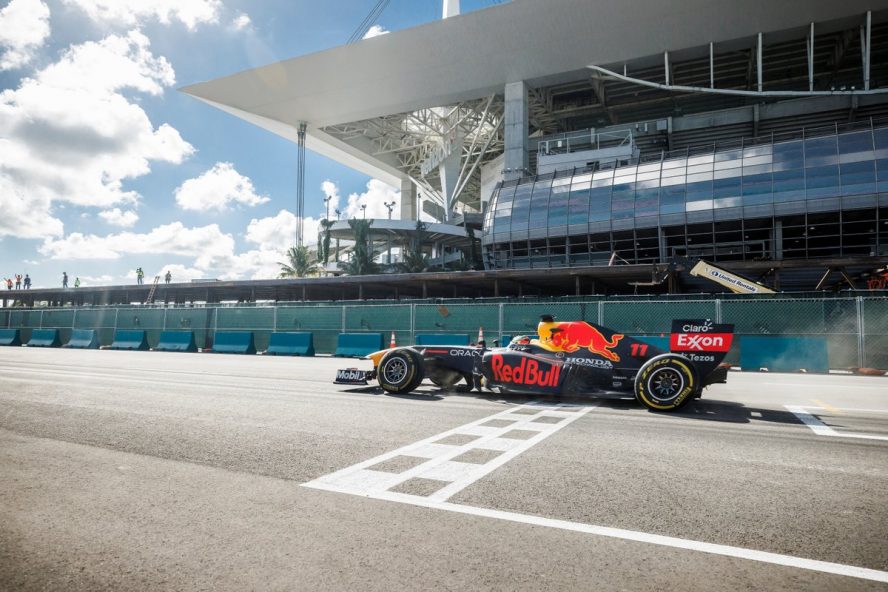 A section of the Miami Grand Prix track is at the “limitations of design”, according to its architects

The most technically demanding part of the Miami International Autodrome is set to be the main “mistake generator”.

As reported by Motorsport.com, this will then lead to the key overtaking spot on the circuit. This admission comes from Charles Metcalfe, Senior Design Engineer at Apex Circuit Design.

Their creation, a 5.4-kilometre anti-clockwise circuit is due to host the inaugural Miami Grand Prix next weekend. Situated in Miami Gardens, the layout surrounds the Hard Rock Stadium, home of the NFL’s Miami Dolphins.

A wealth of action is expected from Turn 17. However, the turn 13 through to 16 sequence is one of the most intriguing sections of the circuit. For a couple of reasons.

At this point the circuit twists above and then beneath the Florida Turnpike, the main road connecting Miami and Orlando.

Due to FIA regulations regarding overhead clearance, pronounced elevation changes were required. The track rises and then falls on either side of a chicane which has a blind apex on entrance.

The cars will also still be affected by lateral load from the previous corner as they enter the braking zone. Turn 11 is a tight left-hander. This is followed by the off-camber Turn 12, as the track ramps up to the tricky chicane.

Apex’s project lead design engineer, Andrew Wallis, has said that “in qualifying, I think it’ll be a truly make-or-break corner for the overall lap time.”

Because of the proximity to major roads, there won’t be any stands in this section, nor fan access. However, it is expected that the sequence will be laden with cameras to capture all the action. A good thing, on what may be one of the most aesthetically interesting sections of the track.

Andrew Wallis commented that the “whole sequence was a real engineering challenge”. This was the result of a trio of factors:

“For us to get beneath the first overpass, we had to meet the FIA regulation that requires at least four metres of clearance, but as we have to tie into the levels of the Turnpike slip road that has a 7% crossfall, our track surface was climbing just at the point where we needed it to be falling.

“There is also an F1 regulation about the rate of change of elevation linked to the square of the speed of the car, so this design basically threads the needle in three dimensions to ensure that the cars go slowly enough to align with the camber of the crossing and then get back under the overpass.”

The venue has also been in trending on social media this week. Their approach to re-creating Monaco’s harbour, which is one of the most iconic sights in F1, has come under fire.

Here’s that water you ordered…

The infield harbour will feature real yachts, but fake water. It has been pointed out that the ‘water’ looks like it’s from the popular videogame, Minecraft.