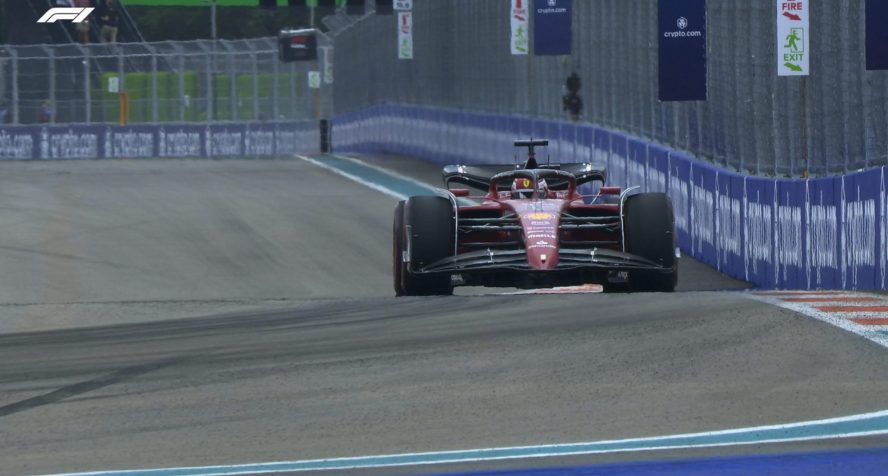 Drivers took to the track at the Miami International Autodrome for the first time for FP1. Charles Leclerc set the fastest lap time of 1:31.098.

Today marked the debut of Formula One as drivers drove on the Miami circuit for the first US race of the season. Excitement surrounded this weekend with an extravagant opening ceremony kicking it off.

All eyes were on the title rivals of Ferrari and Red Bull. Imola was an unfortunate home race for the Maranello outfit. However, Red Bull had a successful weekend as they achieved a 1-2.

Things to look out for this weekend

McLaren is bringing a new suspension package this weekend. Ferrari and Mercedes are also bringing some upgrades with new rear wings. Lewis Hamilton will be looking to improve on his P13 finish in Imola whilst George Russell will be seeking to maintain his successful point finishes in Miami.

In the press conference earlier today, drivers highlighted the challenging “combination of high and low speed corners” as well as the “grip level” on the asphalt being two interesting aspects to watch.

Will Ferrari be able to bounce back in Miami? Will Red Bull continue their streak of success? And where Mercedes is concerned, will they be able to improve on their previous race finishes and increase the pace of the W13?

Let’s get into what happened in FP1!

The Action of FP1

With track repairs having been made on Thursday night, the track was ready for the drivers to take to the grid. The tyres for this weekend are the C4 soft compound, C3 medium compound and C2 hard compound. The temperature of the track is 54 degrees Celsius, meaning looking after tyres will be very important.

All drivers quickly took to the track with Nicholas Latifi leaving the garage first. With others following, George Russell and Esteban Ocon had a very close call as they left their respective garages. This incident is under investigation by the Stewards.

The benchmark was set at 1:39.513 by Lance Stroll on the soft tyres. He then started to move down the live timings as more and more drivers set a time. Championship leader Charles Leclerc went faster than Stroll’s benchmark, but it was soon trumped by Max Verstappen. The Dutchman set a time of 1:36.099 on the soft tyres.

A replay then showed that Verstappen brushed the wall on the exit of Turn 16 and Leclerc and Tsunoda both spun but managed to recover.

As some cars returned to the pits, Karun Chandhok announced that there was 40% of rain arriving on track. Will we see some wet sessions like we did in Imola?

A message popped up on the screen, saying an incident between Mick Schumacher and Daniel Ricciardo would be investigated after the race. A replay later showed that Schumacher was following two cars down a straight and Ricciardo braked, prompting a near-hit between the two.

Sainz and Schumacher also had an incident being noted as the latter tangled with the Spaniard as he returned to the track. As more lap times were being set, Vettel received a black and white flag for crossing the pit-entry line.

Halfway through the session

Christian Horner spoke to Crofty as the session neared its halfway point. The Team Principal said that “tyres will be crucial” this weekend, which echoes what Perez said in the press conference. Verstappen came into the pits, with Horner admitting Car 1 was running a bit too hot.

Ferrari are both on the medium tyres, which seem to be running better than the softs. Leclerc and Sainz remained at the top of the time sheets, with Sainz going fastest with a 1:32.443.

An interesting radio message saw Tsunoda tell his engineer “just let me drive” as he was completing a hot lap.

Valtteri Bottas lost the rear as he went into Turn 7. Carrying too much speed, saw Bottas put his car into the wall. His rear wing and rear-right wheel took the brunt of the impact. The initial yellow flag prompted a red flag, suspending the session.

Red flag! Valtteri is in the barriers, thankfully without consequences for him.

The session is interrupted as the marshals recover the car. #MiamiGP

Despite the red flag, the clock was still ticking down. The timings at the time of the red flag saw Sainz at the top, followed by Hamilton who was 0.021 seconds behind and Leclerc behind the Brit.

Cars return to the track

Cars returned to the track with Sainz being quickest having changed from the C3 medium tyres to the C4 softs. Unfortunately, Sainz then locked up massively at Turn 4 as he spun. This sadly caused a slow puncture on the front right tyre.

Hamilton continues to remain in second but was quickly pushed to third as Verstappen set a time of 1:31.350. With 10 minutes to go, Hamilton and Sainz were pushed down further.

By Nathan Hartley5 hours ago

P2 for our number 23 following his most recent push lap! 👍 pic.twitter.com/X7D37HyQXr

As the session was slowly coming to an end, Russell went second, 0.097 seconds behind Verstappen. Mercedes seem to have definitely made some improvements for Miami.

Russell has finished in the top five every race so far. Could he be the most consistent driver this season?

As the session came to an end, Leclerc topped the time sheets with a 1:31.098. Russell finished a close second ahead of Verstappen and Perez. Alpha Tauri’s Gasly followed behind the Mexican, rounding out the top five.

The final classification for FP1 is as follows:

FP2 begins at 22:30 UK Time after the first practice session of W Series as their opening round kicks off.