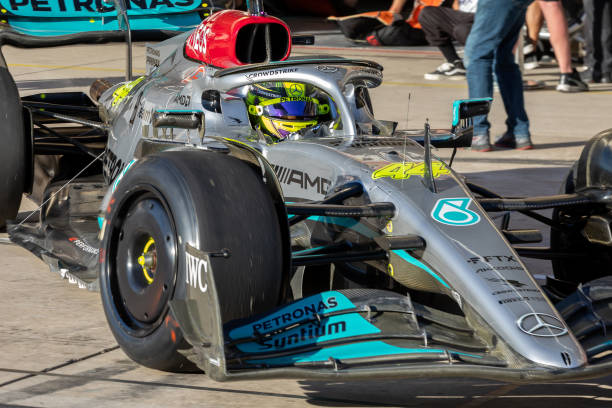 What was the problem in Austin?

Mercedes unveiled a new front wing for the W13 during practice in Austin, which the team will use all weekend in Mexico.

During the US Grand Prix, Mercedes unveiled a significant upgrade package for their car, including a new front wing.

The fact that Mercedes did not use the wing for the entire weekend was, among other things, the result of an “exchange” with the FIA.

The exchange had been about the legality of the new Mercedes component. The wing now has specially shaped fasteners between the two upper flaps, which seemed questionable.

Mexico as a start for Mercedes’ new front wing

However, Mike Elliott, Mercedes F1’s technical director, explained that it was never the plan to use the wing for the whole race weekend in Austin.

There needed to be more copies for both drivers, so only initial testing took place.

“The reason we didn’t run it in Austin was because we only had one of those parts so if we damaged it during qualifying it would have meant the car that damaged the wing had to start from the back.

“Also with a very busy programme we had the tyre test in FP2, we didn’t actually have the time to evaluate.

“We have more of those parts available in Mexico, we will run that on the Friday, we will check if it is all working as expected and the plan at this stage is to race that wing.”

Consequently, it was not only the legal issue that was at the centre of the postponement of Mercedes’ front wing update.

But Elliott explains the process of reviewing new components by the FIA:

“We go through a CAD review process with the FIA before we come to the circuit, that happens all the time.

“It was something that was seen there and then they came back and said, we’re not so sure about this. So that process, I think works.

“I think there’s an argument to be had, whether we want to have it is another question.”

Mercedes’ technical director questions whether it was worth the fight over legality.

“I think there’s fuss about it because in the regulations, it talks about the primary use being for mechanical or measurement purposes.

“Clearly there’s a secondary benefit of an aerodynamic design that’s in there as well.

“We will decide whether we want to argue that one or not, it’s actually not worth a huge amount. The detail looks interesting, but it’s not the big thing on the front wing.”

We’ll see in Mexico whether Mercedes’ controversial new front wing will be worth fighting over with the FIA. The team is currently 3rd in the Constructor Standings.