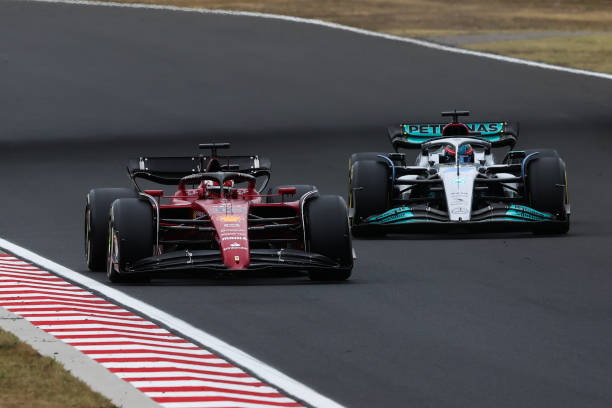 Mercedes aim for P2 finish ahead of Ferrari this season

The Silver Arrows have clawed back lots of lost performance this season, after a disappointing start

Mercedes believe they can still challenge Ferrari for second place in the constructors’ championship ahead of Ferrari.

The Silver Arrows had a tricky start to the season. Their car was heavily hampered by porpoising, resulting in being able to not unlock the full performance of the car.

However, as the season has gone on, Mercedes have been edging closer to the Ferraris. The Brackley team’s car is not as quick as the Scuderia in qualifying, but their race pace is impressive.

Lewis Hamilton came close to winning in Silverstone in front of his home crowd. The seven-time world champion had the best race pace out of everyone.

The 37-year-old also came close in Zandvoort. However, the strategy he was put on after the safety car ruined the rest of his race.

Hamilton himself admitted that he would need some luck to win a race this year. As Red Bull have been dominant since Formula 1 returned after the summer break.

Mercedes will fight until the end for second place

Mercedes Technical Director Mike Elliott still believes the Silver Arrows can fight with Ferrari for second place in the constructors’ championship. The Briton believes this will happen if Mercedes can win a race in the remaining six races:

The 48-year-old says Mercedes’ main aim is to “get back on track” to “properly fight for the championship next year”.

The Brackley team are expecting to have a stronger showing at the next race in Singapore. The Mercedes W13 is more suited to tracks, requiring higher downforce, giving them more chance of winning a race.

Evidence of Mercedes performing well at high-downforce tracks were shown at Hungary when George Russell claimed his first ever pole position. Lewis Hamilton also came close to winning in Zandvoort, which requires a maximum downforce levels.

One slight concern may be the Silver Arrows not performing well at previous street tracks this year. Azerbaijan’s bumpy surface caused lots of problems for the drivers, ending with Hamilton having severe back pain due to all of the bouncing.

However, the Silver Arrows will have more of a chance in Singapore, as there are not many straights. Spa and Monza showed Red bull dominating on the straights, giving no one else a chance.

Speaking in their Italian Grand Prix debrief, Mike Elliott believes that the tight and twisty nature of the circuit may play into Mercedes’ hands, whilst also provide challenges:

“I think when you look back at the learning we have gathered over the season I think we expect that Singapore will be a bit more like we’ve seen in Budapest and Zandvoort,” he said.

“It’s a bumpy circuit which is going to provide its challenges but in terms of the nature of the corners we think it could be a bit better for our car. So, hopefully we will have a good result there.

“As always with all the pre-simulation work we need to do, we will maximise our learning in the practice sessions and hopefully we turn that into a good result over the weekend.”