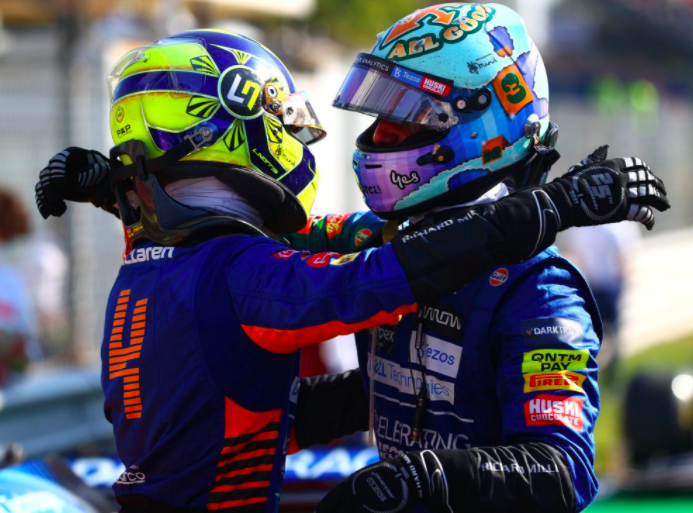 McLaren 1-2 Victory After Verstappen and Hamilton Crash At Italian GP!

There's never a dull moment at this track.

This was the first Grand Prix that both Max Verstappen and Lewis Hamilton didn’t finish that they started in Formula 1.

It was a brilliant start by Daniel who took charge in the opening lap. Ricciardo powered through for the lead. Many were thinking when is the last time Mclaren led a Grand Prix? The Aussie achieved an amazing advantage for the team. The majority of drivers started on medium tyres. The track temperature was about 45°C. A one or two-stop strategy was ideal.

Verstappen locked up and tapped Hamilton who was pushed wide off the track. It was definitely a racing incident. Giovinazzi went off into the chicane after making contact with Carlos Sainz. Antonio was forced to take an early pit stop. Drivers had to reduce speed by 40% without overtaking. Despite some debris flying through the air, the green flag appeared.

The AlphaTauri team saw a sad moment with both drivers out for their home race. Yuki Tsunoda didn’t race. Pierre Gasly had a front suspension issue. Mercedes engines were in full battle in the DRS zones with defensive driving between Lewis Hamilton and Lando Norris. Bottas starting from the back of the grid made a massive amount of progress with ten overtakes. His straight-line speed was impressive. Ocon gave no space and shoved Sebastian off the track. Vettel quickly recovered though. Esteban earned a five-second time penalty for the incident.

The pit lane strategies disrupted the race order. Daniel had a 2.4 pit stop coming out in a decent position. Red Bull couldn’t get Verstappen’s rear right wheel in properly resulting in an 11.1 pit stop. Hamilton had a slow 4.2 pit stop as well. Mercedes messed up there.

The two title contenders went wheel-to-wheel and smashed into each other cascading off into the gravel. Both drivers took each other out of the race. A yellow flag appeared. It was a scary moment. Max’s right rear tyre rubbed against the top of Hamilton’s helmet. It looked as though the seven-time champion had to slouch down to protect himself. Verstappen got out of the car safely and headed to have words with Helmut Marko. Lewis struggled to shimmy out and eventually returned to the Mercedes garage. It’s great that we have halos now in Formula 1 cars. After the cars were removed and safety car laps, the race resumed.

It became a Mclaren and Ferrari fight for the top. Daniel Ricciardo and Lando Norris led the race with pace. Perez and Bottas battled to recover positions to still have a Red Bull or Mercedes on the podium. Perez’ performance with overtaking was good until a five-second penalty. Sergio gained a track advantage ahead of Charles Leclerc earlier on the track.

Nikita Mazepin spun off into the barriers exiting the race. Lance Stroll was under investigation by the stewards.