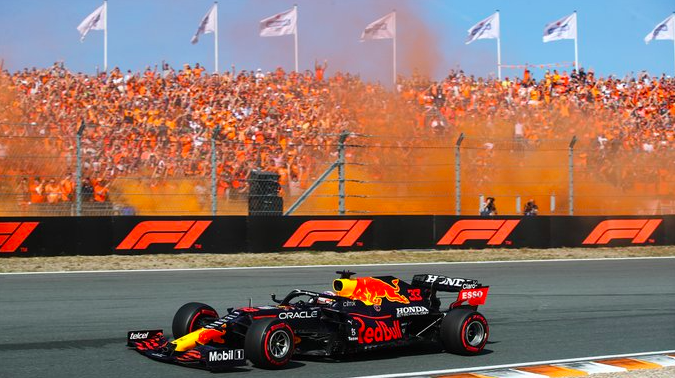 The Dutchman maintained pace to impress at his first home race.

The Dutchman impressed to win at home with a time of 1:30:05 after such high expectations throughout the entire weekend.

It was simple off the line for Verstappen who took the lead in the opening lap. Max marked a milestone for 1,000 career laps led in Formula 1. Ricciardo slightly suffered from technical difficulties when his right rear released smoke. Daniel did then press on since there were no signs of anything leaking.

The aim of the race was one or two stops for a smart strategy. The title contenders continued to battle by following similar choices. Mercedes brought in the seven-time champion after about 20 laps with a 3.6 pit stop. Red Bull responded with a 2.7 pit stop for the Dutchman. Max maintained his position in between the Mercedes drivers.

Although Sergio started in the pit lane after changing the power unit in his RB16B last night, he managed to overtake reaching 14th. Pacing himself, Perez performed well while managing his medium tyres to get a proper position.

Bottas led and held on as much as he could until Max swept by. Eventually, Valtteri went in and came back out on medium tyres. The Finn fought hard as it was crucial to keep a gap apart from the other drivers. Ferrari came along strong as Charles Leclerc on medium tyres and Carloz Sainz on hard tyres improved.

Russell received a five-second penalty for speeding in the pit lane. Despite the hiccup, George trekked on with his hard tyres battling Lance Stroll.

A double yellow flag popped up as Sebastian spun by turn 3. The German was blocking half of the track but fortunately avoided the barriers. Yet Vettel and Valtteri almost made contact.

Lando had great pace and precision. Norris had excellent tyre management. The Brit raced on the same medium tyres for 44 laps until his first pit stop. McLaren got their strategy right to keep the driver with the freshest tyres for the latter period of the race.

Pierre Gasly cruised with consistency within the top five. Meanwhile, Mazepin had to retire from the race because of mechanical issues.

Verstappen leads FP1 after a session filled with yellow flags.

Lewis Hamilton got the fastest laps in sector 1 and sector 2. He tried to gain ground on the track while debating on when to challenge Max Verstappen.

AlphaTauri saw a sad moment when Yuki Tsunoda retired from the race because of a telemetry issue.

There was a Spanish battle between Sainz and Alonso. The Ferrari versus Alpine was well entertaining especially by turn 3. Alonso set the tone for a gap between his teammate Esteban Ocon.

Ricciardo was rattled in his attempt to hold off Perez who was gunning for points. Then Sergio and Lando went wheel-to-wheel which lifted his suspension and tyre.

There was a surprisingly slow late pit stop for Valtteri Bottas connected to tyre vibrations. The mission was to secure fastest lap.

The orange flared crowd went wild for Max as he received cheers and hugs from Tiësto and the Red Bull team.

Verstappen is now leading the driver standings. Sergio Perez got driver of the day. Round 13 was Red Bull Racing’s time to shine!